In Bigg Boss 11 house, Hina Khan will be seen helping Priyank Sharma to put on her bikini!

Bigg Boss 11 house has been converted into a science lab this week for the luxury budget task. The workers in the BB Lab are experimenting on the robots trying to invoke human emotions in them. And putting an extra effort for the same task, today we will see Hina Khan helping Priyank Sharma put on her bikini.

In this week’s task, the contestants have to make the opposite team’s contestant laugh, cry and get angry. They have to do so by their words or actions. Puneesh Sharma is the scientist or as we usually say, the sanchalak of the task.

We even saw Luv Tyagi cross-dressed, looking like a shy female with fake breasts! And obviously it made everyone laugh.

Today we will get to see another similar attempt of making the opposite team laugh. And this time it will be Priyank Sharma with his bikini look. The contestant will don Hina’s blue polka dot bikini and it looks hilarious! He also puts on a wig and the TV actress’ robe. 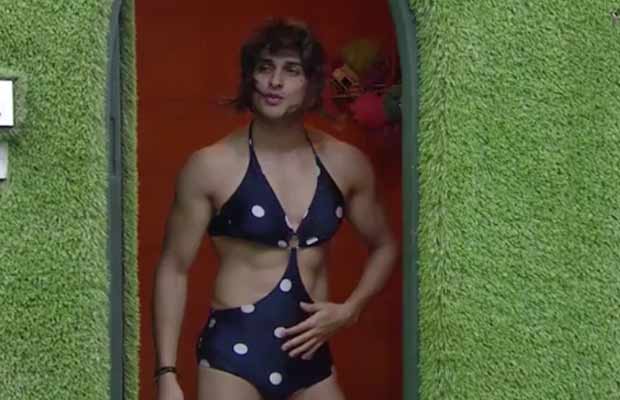 Since anger is also one of the emotions which needs to be brought out, we will see Hina and Priyank targeting Vikas. Both of them will shower very harsh words on him. And will also bring up the same topics which Vikas used yesterday in the task. Watch here: Bigg Boss 11: Priyank Sharma And Hina Khan Provoke Vikas Gupta- Watch Video!

Meanwhile, Shilpa Shinde, Hiten Tejwani, Priyank Sharma and Luv Tyagi are the ones nominated this week for leaving the house.