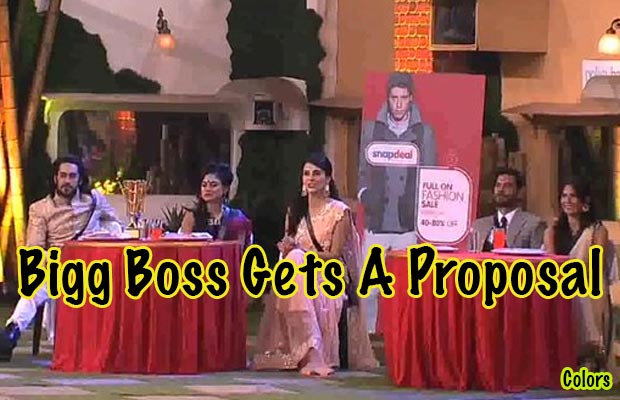 [tps_footer]As Bigg Boss 9 is getting nastier with more arguments and ugly fights between the housemates, a special entry is all set to lighten up the mood inside the house. In tonight’s episode you will see how ‘Gutthi ‘aka Sunil Grover from ‘Comedy Nights With Kapil ‘ is all set to create laughter riot in Bigg Boss 9 house.

Cheering up the audiences, housemates and also Bigg Boss, Gutthi will be seen entertaining everyone at her best. Gutthi has proposed many Bollywood stars including Ranbir Kapoor and Salman Khan, but this time she has moved on to someone that nobody expected ever.

Gutthi told that Bigg Boss had ‘gandi nazar’ on her and that now she wants him to make a jodi with her. She also requested him to take her on a honeymoon at a nice place and not in confession room of Bigg Boss 9 house. Well, Bigg Boss doesn’t usually reply instantly, but was quick to respond on Gutthi’s accusations.

Bigg Boss replied saying that he has no wrong intention and ‘gandi nazar’ on anyone. He also said that he does not want to make a jodi with Gutthi. Well, this created laughter riot in Bigg Boss 9 house.

Tonight’s episode is surely going to be worth watching with much of entertainment and fun. Also, do not miss the glamorous and hot belly dance of Nora on ‘Maan Ma Emotion Jaage Re’ and guess who faced off with Nora for belly dance? None other than ‘Gutthi’! There are many more sizzling performances by other contestants on the show tonight.