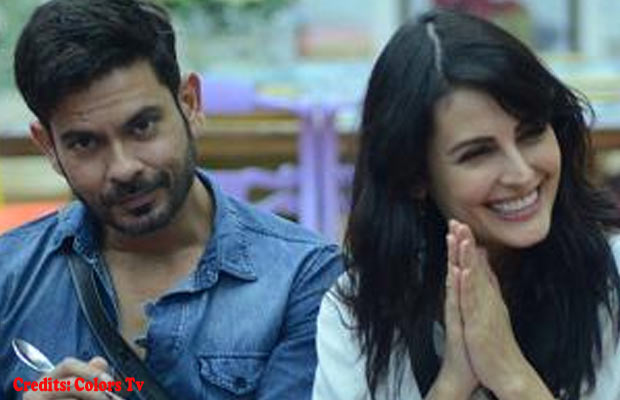 Day 3 of the Bigg Boss 9 begins with a very Navratri festival song. Arvind Vegda surely misses his home,doesn’t he? Prince Narula and Yuvika Choudhary joined the early morning dance too.

On one side,a cute friendship is building between Yuvika and Prince. He said he will be there for her when needed. On the other side,Mandana has started to annoy everyone.

Second day of Luxury task begins. Suyyash Rai and Rimi Sen select Kishwer Merchant and Aman Verma for ‘Melophobia’ challenge. It is a fear of music. The task is to blow harmonica until the bell rings. The twist is the harmonica is placed in a fish’s mouth. Gross right?  The pair successfully completes the task. The next task is given to Aman Vermaand Kishwer Merchant again for ‘Chaetophobia’ challenge which  is fear of hair .This time the pair is selected by Vikas Bhalla and Yuvika Choudhary. The pair completes this task too.

The last task of the day was ‘Trypanophobia ‘ which is fear of needles. Roopal Tyagi and Digangana Suryavanshi give the challenge to Suyyash Rai and Rimi Sen. The task to get a tattoo of Bigg Boss. Suyyash was ready to get the tattoo unless Bigg Boss gives them the liberty to select the font and the size. He, then, got into an argument with Rimiabout the same. He said he is here to do tasks and can’t sacrifice everytime. Suyyash lost his cool , abused and they both walked out of the task. He also called out Bigg Boss for being partial towards Mandana Karimi. Later, Mandana confronts Suyyash about the same. After a while,Suyyash apologizes for being rude.

The snoring is still an issue in the bedroom. Mandana talks about how she hasn’t slept in three days. Everyone mentioned that even Yuvika and Ankit Gera haven’t slept either. They give suggestions that everyone should keep changing their beds so atleast some days they’ll get good sleep. Mandana, as usual being self centered, said that she doesn’t want to change her bed. Instead, others should adjust. Well, that’s not cool !! Kishwer gets frustrated and starts imitating her in the bedroom. Ankit Gera, Arvind Vegda,Suyyash Rai and Aman Verma were surely enjoying that.

Tomorrow, new task will be assigned for Captaincy. A fight between Rochelle and Mandana , a huge task for being the first Captain of the house and much more. Do not miss episode because it sure looks entertaining.