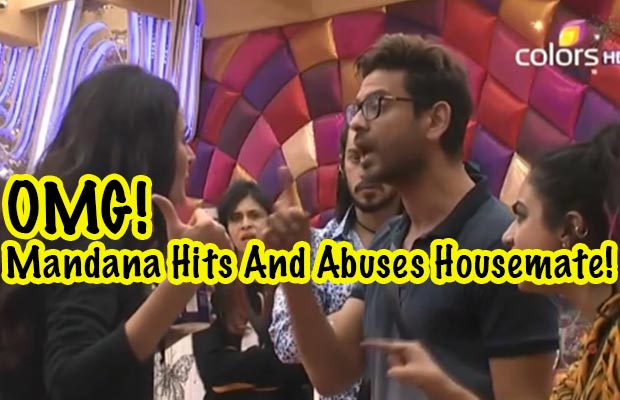 [tps_footer]Bigg Boss 9 contestants are known for their unexpected behavior and it takes minutes for the housemates to create fight out of nowhere. Just after Salman Khan left Bigg Boss 9 house, the house turned into a wrestling ring.

Like always, drama queen of Bigg Boss 9 Mandana Karimi created an unnecessary fight in the house with Priya Malik. It all started when Mandana warned housemates that they shouldn’t touch her personal belongings without asking her.

On her this statement, Priya Malik started arguing with Mandana and that created a very ugly fight between the two. As the house is known for catfights, it was much needed to continue the trend. While arguing with each other, Mandana Karimi got extremely violent with Priya which became a big issue in the house.

From getting abusive to hitting Priya Malik, Mandana Karimi tried every bit to create a big fight out of nowhere. It didn’t stop there, the whole house turned against her for her violent behaviour against Priya. Taking revenge, Priya threw Mandana’s personal stuff and the fight continued.

Being the captain of the house, Suyyash Rai took away Mandana Karimi’s personal belongings as a punishment. But well, as Mandana is known for her big time drama behavior, she rejected to wear mic until Bigg Boss does not return her personal stuff. The high voltage drama does not end there, there is more to come.