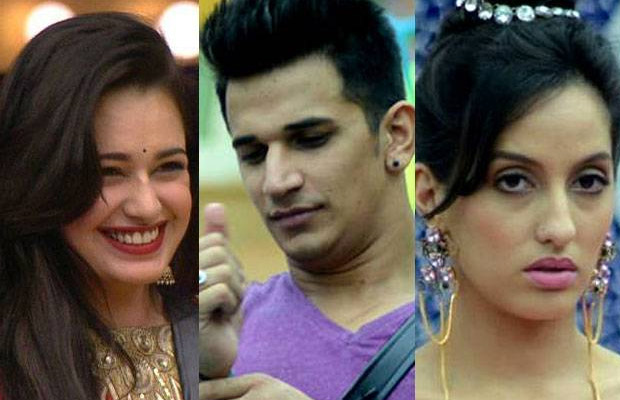 [tps_footer]With just three days left for the grand finale of the most controversial reality show Bigg Boss 9, the housemates are quite excited and nervous too. After winning a task, Bigg Boss gave Rochelle Rao and Rishabh Sinha to interact live with the fans at a mall in Mumbai.

Both the strong contestants who made it to the grand finale of the show, got the golden opportunity to interact and appeal for their votes to the audiences out. As they were locked behind the cage bars, numbers of fans were seen cheering and clicking selfies with them.

Well, they made a perfect use of the golden opportunity or no that time will tell better, but its time for us to reveal another interesting happening of Bigg Boss 9 house. Yes, RJ Malishka who is popular for her voice like Bigg Boss, interacted with the housemates.

Like every year, this year too RJ Malishka entered the house through a phone call and interacted with the housemates on their journey. With the new day in the house, contestants seemed too happy and excited to have a conversation with her.

Not leaving them so easily, Malishka grilled Prince Narula on his confused relationship with Nora Fatehi and Yuvika. To which Prince replied saying that he always made it clear to Yuvika that he will always be his good friend. He went ahead saying that Yuvika is his good friend while he shares a relationship with Nora, which has started from Bigg Boss 9 house. Finally the truth comes out?

She also asked Prince on why he fights and irritates Mandana Karimi always. To which he instantly replied saying that maintains a limit with Mandana after Salman Khan had warned him. Also, Mandana was nowhere behind to answer on the same as she replied saying that she can still fight alone with Prince.

With the finale being three days away, star host Salman Khan will be seen giving a grand adieu at the blockbuster finale of Bigg Boss 9 Double Trouble!