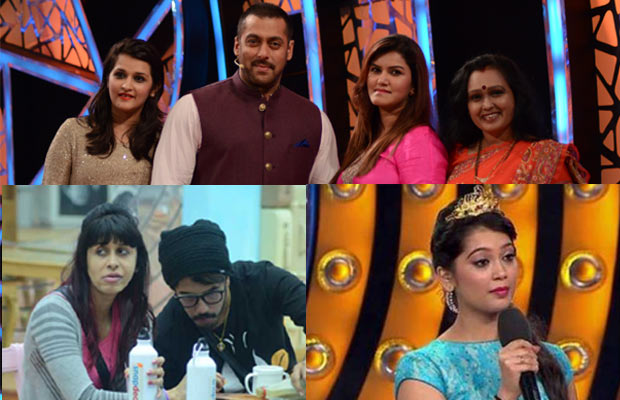 Sunday is a day full of anticipation for the Bigg Boss 9 inmates with thoughts of elimination constantly running through their minds. With Bigg Boss 9 contestant Mandana Karimi’s co-star Randeep Hooda promoting their upcoming movie Main Aur Charles on Bigg Boss Nau, he is seen commenting upon Mandana and her antiques. When asked about his costar, Randeep says that Mandana is being herself inside the house and further has a fun chat with Bigg Boss host Salman Khan while he dons the ‘Charles’ avatar!

Salman pulls a prank at Rimi Sen by giving her ‘Ticket to Finale’ placard that puts her in the state of absolute shock. As a result, Rimi cries her heart out on not willing to stay inside the house. Keeping fun and games aside, Salman Khan further asks Digangana to pull up her socks and stop behaving like a ‘giggly, spoilt kid’. Salman asks Rochelle her opinion on the worst perfomer jodi during the Lagaan task and replies that she was contemplating between Yuvika-Vikas and Digangana-Roopal. Repeating the history once again, the housemates begin arguing about who indeed performed the worst!

A family panel consisting of Digangana’s mother, Suyyash’s sister, Kishwer’s mother and Prince’s sisters interact with Salman Khan and give their perspective on how their respective loved ones are performing on the show. While Suyyash’s sister and Kishwer’s mother agree that Suyyash is playing the game from his heart, they also say that Kishwer is using her brain and moving up the ladder. Digangana’s mother appears worried about her little princess daughter and asks her to take good care of herself. Prince’s sister requests Salman Khan to keep away from groupism and bring out his individuality in the game.

With Mandana and Prince safe from the eviction, we already Exclusively revealed that contestant Roopal Tyagi is been evicted from the house. Last week we saw Roopal’s ex-boyfriend Ankit Gera evicted and this time Roopal was shown doors of Bigg Boss 9 house on the basis of audience voting.

Every evicted person gets a privilege to use a big bomb where they get opportunity to remove their frustrations on any of the contestant or Jodi they didn’t like in the house. With this, Salman Khan gives Roopal Tyagi a power to tie up any Jodi again back as in the double trouble room task they all were unlocked, the contestants were not in jodis then. Making her decision, Roopal targeted one Jodi. Any guesses? They are Suyyash and Prince.

What twist will the Bigg Bomb bring in Bigg Boss 9 contestants’ lives?