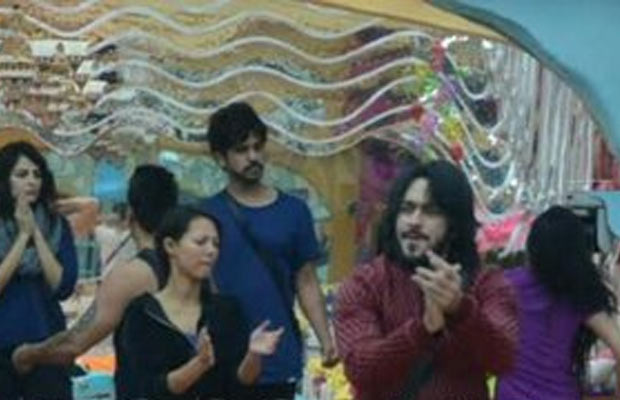 [tps_footer]Now we exclusively reveal that Rishabh Sinha the new wild card entrant of the show has made his entry in the house and has turned to be unexpected. He was given a grand welcome by Bigg Boss with ‘baand baaja’, at the same time the contestants were in shock, especially Kishwer Merchant who has already worked with Rishabh.

Soon after Rishabh made his entry in the house, he started created ruckus as Bigg Boss had already informed him to play a mind game with the contestants and to show them the real them. Starting with Kishwer, Rishabh went in the kitchen and used someone’s mug to have coffee which made Kishwer argue with him. The duo had an heated argument over it as Kishwer told him that he can’t use anyone’s mug this way.

As he was well guided by Bigg Boss, Rishabh didn’t leave a single chance to get down in argument with the contestants of the show. Soon as he entered the house, he started commenting about each and everyone in the house. The Splistvilla fame commented on the other Splitsvilla fame Prince, he said, “ye Prince hai, koi king nahi.”

Not stopping there, he also commented on Suyyash, he said, “I don’t like Suyyash at all. I don’t like Men who take help of Women to enter in Bollywood.”

Well, we wait what more high voltage drama Rishabh has for the contestants and audiences in the show. Also another wild card entrant Puneet Vashist who has worked in All The Best (2009) with Ajay Devgn and Shah Rukh Khan’s sidekick in Josh is all set to enter the house anytime. He has acted in number of television soap operas also.