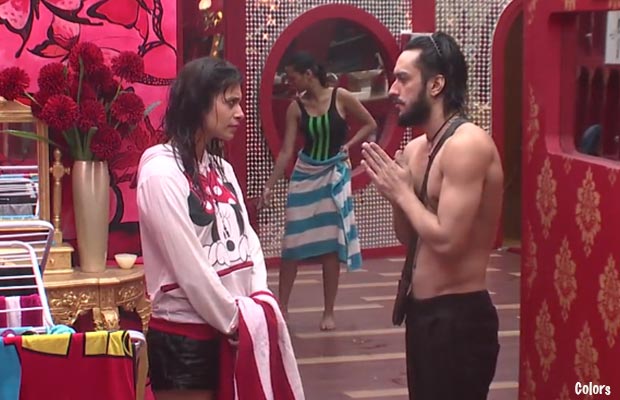 [tps_footer]Bigg Boss 9 house is known for changing equations among the housemates, contestants who were friends at the first are turned enemies and it’s vice versa. With BB9 hotel task, we saw many ugly fights and sweet revenges in the house.

Bigg Boss 9’s first wild card entrant Rishabh Sinha gave a quiet hard time to the contestants of the house during Hotel BB9 task. Rishabh along with his task Partner Mandana harassed the contestants by treating them like the dogs of the house. The duo who were the guest of the house made Kishwer fetch the artificial bone for almost three hours. This thing not only upset Kishwer, but also other housemates were annoyed at Rishabh for being such with a female in the house.

Well, earlier in fun the contestants took sweet revenge from Rishabh by throwing his bag inside the swimming pool. But realizing your mistake is good thing and moreover confessing about the same, makes you greater person. Rishabh, who is known for his devil behaviour, apologized Kishwer for the dog task that he did during BB9 hotel task. He said that he is regretting of what he did and he would make sure that this wont happen again ahead. He also asked Kishwer to take the revenge if she gets a chance ahead.

Well, another mind strategy by Rishabh? Time will tell who are friends and who are not!