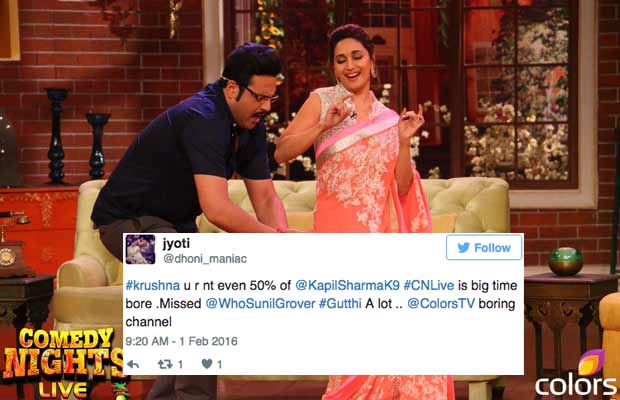 Viewers and fans who have enjoyed watching Kapil Sharma and his show for a very long time on the television, were surely upset and disappointed to see Krushna Abhishek mocking Kapil in its first episode. Soon, fans took over on social media to criticize Krushna and ‘Comedy Nights Live’ for copying the entire show and its format. From its background music to Kapil Sharma’s comedy style, the show is nothing, but a repackage of ‘Comedy Nights With Kapil’.

Not only that, what more left audiences offended to know that Mika Singh replaces Siddhu. Well, it seems Krushna Abhishek must have lost his little bit left fan following too after the first episode of ‘Comedy Nights With Live’ was telecast yesterday.

Comedy Nights Live didn’t make us or fans giggle and entertained and surely everyone missed Kapil Sharma on the show with his team. From Palak and Gutthi’s comedy bonding, to Siddhuji’s one liner punch lines, we missed every bit of ‘Comedy Nights With Kapil’.

Let’s take a look at what fans had to react on Krushna Abhishek replacing Kapil Sharma’s successful Show!

A Desperate Unsuccessful attempt by Krushna Abhishek to replace Kapil sharma. Atleast try to be original if not… https://t.co/6mcsaS3Xeb

#ComedyNightsLIVE #Krushna screwed the fame and name of show #ComedyNights#KapilSharma man no one can replace you..!!