This season of Bigg Boss is undoubtedly the most controversial of all. The last few days have been really tough for the Bigg Boss 10 housemates as they had to deal with the odd behavior of the Dhongi Baba. This time he had crossed his limits by throwing his pee on VJ Bani and Rohan Mehra after which the makers of the shown have thrown him out.

After he was thrown out, the viewers gave mixed responses regarding his exit. Former Bigg Boss contestant Diandra Soares today took to her Twitter account and tweeted something which shocked everyone. Diandra shared a sizzling chemistry with Gautam Gulati and they even created a stir among the Indian television audience when they kissed each other in the bathroom.

Through her tweets Diandra told people to enjoy the show because everything is already predecided and set. It seemed as if she was trying to call the show scripted. She tweeted, 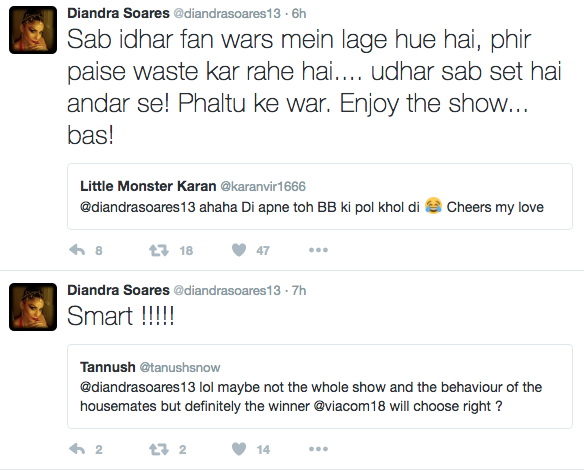 What? What did she just say? Is it true? Is everything already planned in the show?