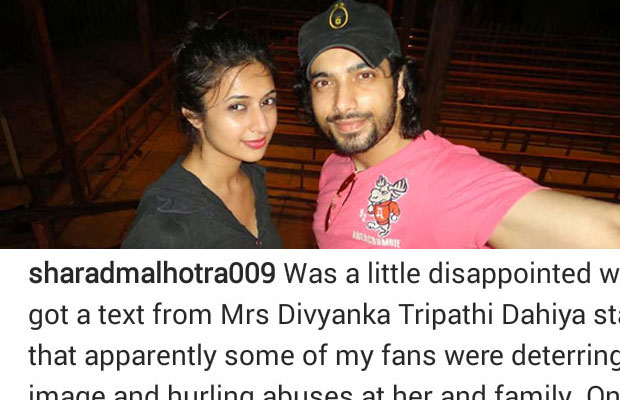 Television actress Divyanka Tripathi recently got hitched to Vivek Dahiya in a star-studded ceremony. Divyanka Tripathi was earlier dating actor Ssharad Malhotra and the two moved on with their careers immediately after parting ways. Before Divyanka-Vivek’s wedding, Malhotra even wished both of them a very happy married life.

Well, all’s well that ends well but it seems Divyanka wished for a public apology from Vivek for their past and on how Malhotra’s fans were abusing her family and deterring her image in public after their break up. Not liking the disrespect towards the women, Ssharad Malhotra made a public note saying that everyone should respect woman and also asked everyone to maintain their privacy as both (Divyanka-Ssharad) of them have moved on in their life.

Here’s what he wrote:

“Was a little disappointed when I got a text from Mrs Divyanka Tripathi Dahiya stating that apparently some of my fans were deterring her image and hurling abuses at her and family. On one hand we have the women at the Olympics making the nation beam with pride and happiness and on other we also have a certain section of people who are disrespecting women.. As Mrs Divyanka Tripathi Dahiya asked me to make a public note, so I hereby request one and all that kindly respect women and please respect our privacy as we both have moved on… I wish her a happy married life.
Also I completely believe that true fans of mine would never tarnish a women’s image.
#respect #women“ 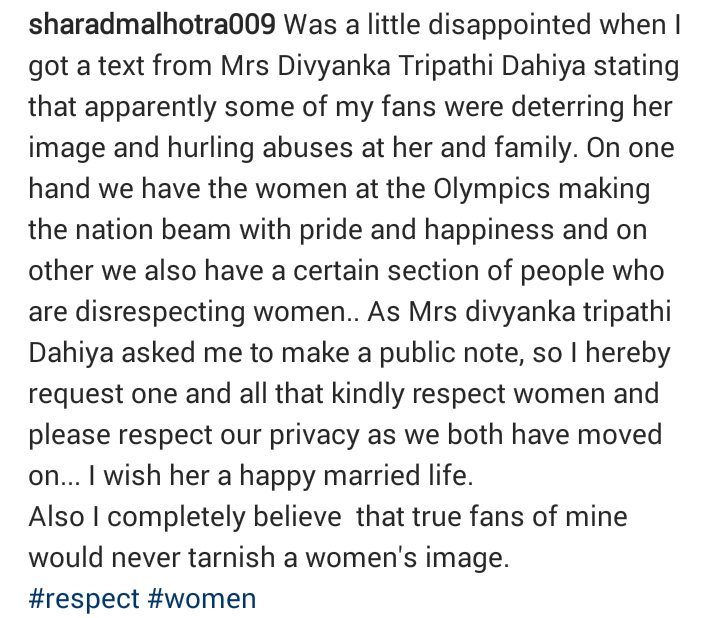