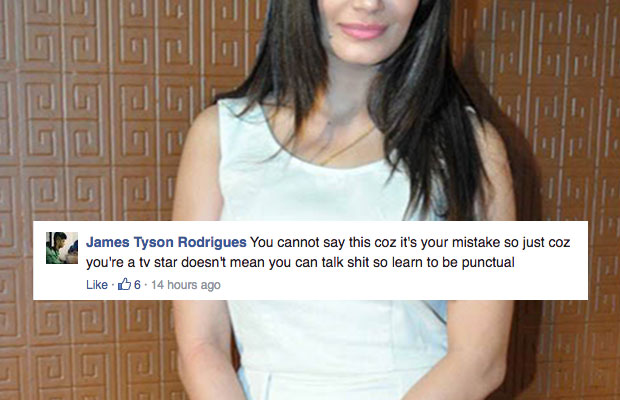 The people of our country are facing a lot of issues such as demonetisation, Bangalore mass molestation case, Om Puri‘s demise but none of them are as worse as the problem which this former Bigg Boss contestant had to face when she was offloaded from a Jet Airways flight.

We are here talking about actress and former Bigg Boss contestant Payal Rohatgi. Her recent Facebook live video mentions how she and her boyfriend, wrestler Sangram Singh were offloaded from a Jet Airways flight when they were going for a holiday to Kerala.

Her video has all subjects of concern, yoga, anti-secularism and maybe punctuality, for a change. Yes! Payal herself mentioned that her flight was at 6.50 and she had actually reached airport to check in at around 20 minutes before the flight.That’s actually the time the gate closes. As far as we know, it is clearly mentioned in the terms and conditions of the ticket that you should reach the terminal at least one hour before the departure time, if it’s a domestic flight.

While she was ranting about her seemingly bad experience with Jet Airways, people didn’t leave a single chance to troll her.

We have no clue what she’s trying to say. Well, Payal, there are certain things fame can’t buy, and punctuality is one for a start!