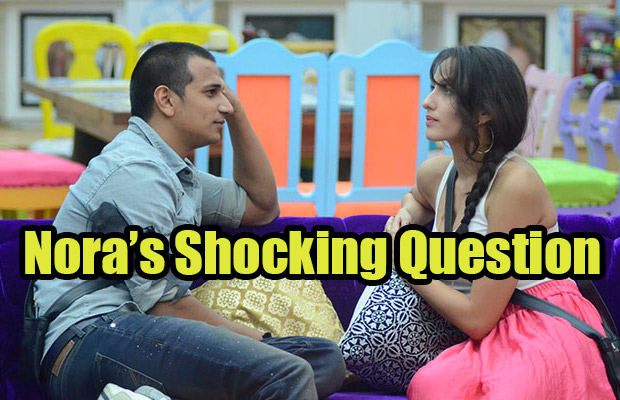 [tps_footer]Bigg Boss 9 contestants had wonderful journey inside the house for almost three months. Now that the top 5 contestants Rishabh Sinha, Prince Narula, Mandana Karimi, Rochelle Rao and Keith Sequeira are inching close to the finale, all of them were seen recollecting their best memories of their journey in the house, as they were sitting in the garden area.

Also, Bigg Boss got another twist for the top 5 contestants of the show. Yes, evicted contestants Nora Fatehi, Yuvika and Gizele Thakral have entered the house once again. Prince Narula’s two favourites Yuvika and Nora’s entry initially left him into a shock.

As Yuvika made her entry in the house, Prince Narula looked surprised as well as happy. Later, Yuvika confronted Prince on his love connections with Nora Fatehi and that if his proposal for her was for the sake of the game or no. This question left Prince trapped once again.

Well, it didn’t end there as Prince Narula had to face Nora Fatehi who also made entry in the house after Yuvika. We exclusively reveal, Nora Fatehi initially rejected to talk with Prince as according to her Prince cheated Kishwer Merchant to achieve ‘ticket to finale’.

Nora asked Prince if he did the right thing with Kishwer Merchant who was very close to him in the house. To which Prince replied saying that what he did was right and what is being showed outside is the edited one. Like really?

Nevertheless, nobody better than Kishwer Merchant, can handle the situation and get the clarification on the same from Prince Narula. Meanwhile, we inform all the contestants are nominated in the last week of the finale and also they will witness mid-week eviction.