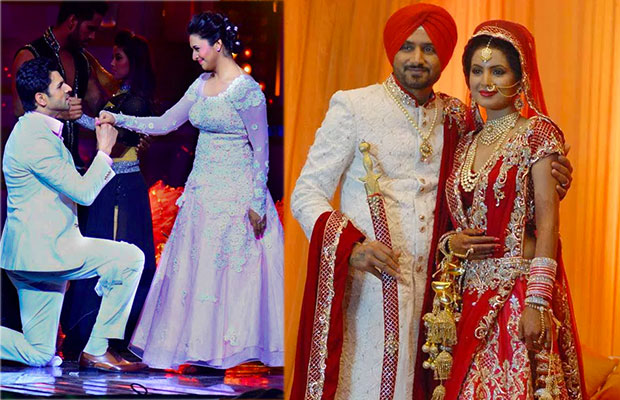 The celebrity dance reality show, Nach Baliye is grabbing all the limelight. The show recently hit the headlines after television actress Divyanka Tripathi injured her back during her dance rehearsals with husband, Vivek Dahiya. Divyanka won’t be performing for her upcoming act while her husband Vivek Dahiya will go solo. Well, the show has started making headlines since it was announced and sees some of the best and most loved television celebrity couples of the industry.

Well, Nach Baliye is in the news again, and this time, the reason will leave you excited. The upcoming episode of the dance reality show will see Indian Cricketer as a guest performer along with his celebrity wife. We are talking about none other than Indian bowler Harbhajan Singh and his wife, Geeta Basra.

The much in love couple has begun rehearsing for their much-awaited dance act, and the episode will be aired this weekend. We are sure Harbhajan and Geeta will leave audience mesmerized with their dance performance. Are you excited? We surely wish to see their daughter Hinaaya too on the show.

Well, Harbhajan has been very much a part of the reality show, Roadies Rising but this time we will see him dancing with his Baliye. We honestly can’t wait! Meanwhile, Harbhajan Singh is also busy with IPL 10 and is playing for Mumbai Indians team.