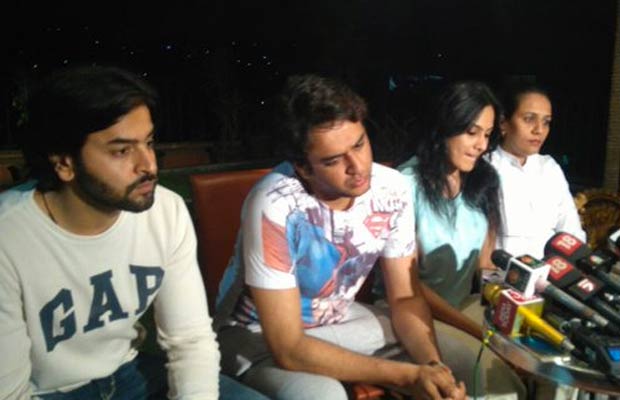 [tps_footer]Pratyusha Banerjee‘s suicide has left each and everyone in a state of shock and are still trying to believe that their favourite television actress has committed suicide. Late TV actor Pratyusha Banerjee‘s close friends from the television industry including Kamya Punjabi, Shashank Vyas, Adaa Khan and Vikas Gupta held a press conference to reveal about Pratyusha Banerjee’s relationship and problems with boyfriend Rahul Raj Singh.

While each and everyone is speculating foul play on Pratyusha’s suicide, Vikas Gupta who recently offered the role to Pratyusha revealed that the late television actress was not facing any financial troubles. Vikas told reporters that Rahul has physically assaulted Pratyusha in public many times in the past and that they have proof of it.

“In a party he has slapped her and many people know it..when time comes we will show it. There is more depth in this story…it’s not the just suicidal case,” Vikas added.

Not only that, Vikas also mentioned that Rahul’s ex-girlfriend Saloni used to torture Pratyusha and that Rahul never took any action against it instead he used to party with her. As per reliable source of a lawyer, Saloni was also with Rahul in Kokilaben Hospital after Pratyusha‘s death.

On the other hand, Kamya Punjabi who is in touch with Pratyusha since Bigg Boss 7, told reporters, “There were injury marks on her nose and under her eyes. We have taken pictures (as a proof)….police are probing domestic violence angle. We will give our statement to the police.”

Meanwhile, Pratyusha‘s boyfriend Rahul Raj Singh has been admitted to a Mumbai hospital after he complained breathing problem. The police questioned Rahul for 14 hours on Sunday after which he was let go. Post mortem reports claimed that there was no foul play in her death and its clear suicide. Rahul has not been given clean cheat by the police and is trying to investigate the case in more detail.[/tps_footer]