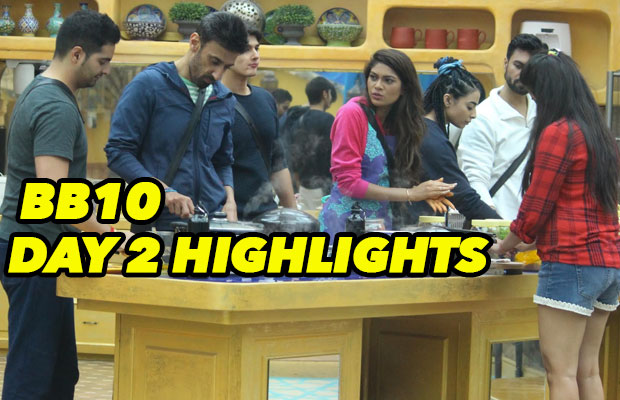 On day two, the contestants wake up dancing to the tunes of the song ‘Gupt Gupt’ unaware of what is in store for them. The day starts with fight over tasteless food as Manoj questions the culinary skills of the celebrities. He comes whining to Karan and tells him that the food is ‘Vaahiyat’ and he would like to assist them in the kitchen going forward. Lopamudra jumps in the conversation and they soon have an argument.

Priyanka Jagga, being at her cunning best, continues to reprimand the sevaks and forces them to follow her orders. Bani asks her to show some ‘courtesy’ and use the word ‘Please’ while ordering around. Priyanka, however, takes offense to this.

Commoner Navin manages to irk Swamiji with his actions after which Swamiji claims that his health is deteriorating because of Navin’s torture. On the other hand, Gaurav and Akansha are seen bonding as he helps her with a manicure. Later in the day, Bigg Boss introduces the task ‘Raaz’ wherein the celebrities have to solve a riddle and find out that one big secret of the commoners. If they successfully decode all the secrets, they will become the maliks of the house while the Indiawale will become their sevaks. As soon as the task is introduced, fights and insecurities come to the fore while the gang of celebrities continue to strategize.

Swamiji, surprisingly, finds it difficult to deal with the precarious scenario and as a result, emerges as a troublemaker inside the house. From threatening Lopamudra to questioning Akansha’s intention towards Gaurav, he starts hurling harsh comments at every contestant. Later in the night, right before when the celebrities decide to retire for the night, Swamiji wakes them up and asks them to make food for him. Shocked by his behavior, Monalisa gets into an argument with him. Exhausted and tired, the celebrities’ first crib about following his orders but ultimately decide to give in.

Will celebrities finally get a chance to be the maliks, will they successfully beat Indiawale in the first task of the season?