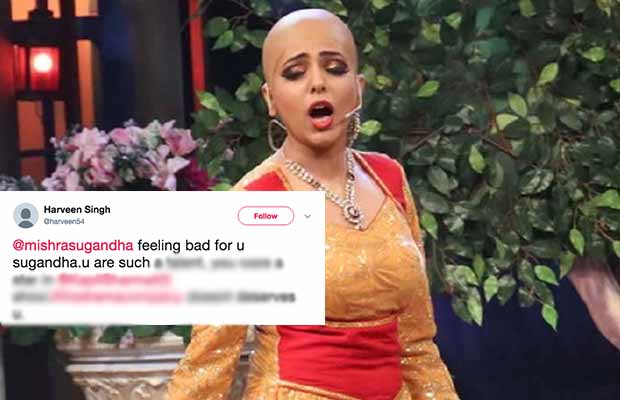 In the opening episode, Sugandha Mishra portrayed the role of Anarkali.

The Drama Company had a decent start yesterday. The episode saw the act of the love story of Anarkali played by Sugandha Mishra and Salim played by Ali Asgar with a comical twist to it. Krushna Abhishek played Akbar, Riddhima Pandit played Jodha.It was a good opening and the comedians are already known for their awesome contribution in making people laugh.

There was a scene in which Salim tells his father about his love for Anarkali. Akbar, as is known, doesn’t agree. A little later, Krushna gave the scene an amusing twist as he touches Sugandha’s head, removes the wig that she is wearing and lo and behold! Sugandha is bald. Krushna kisses her on the bald head and then replaces the hair back in a disordered form and Suganda puts it back in order.

It was a surprising scene for everyone because no one expected something like this to occur and it was instant so if you miss it, you miss the fun. Sugandha Mishra has proved to be a great actress, an awesome comedienne and a beautiful singer. It’s not the first time she left the audiences spellbound because of her talent. She is a very good mimic artist too and she is best known for mimicking Sonam Kapoor and Kangana Ranaut.

Although her professional life is in the news now and then, her personal life was making headlines recently. It was rumoured that she was in a relationship with fellow comedian Dr Sanket Bhosale and was planning to marry him. The comedienne put all the rumours to rest when she said that both of them are good friends and in no hurry to marry because they have to succeed further in life.

The Drama Company airs on Sony TV and will come on Saturdays and Sundays at the time slot of 8 pm.