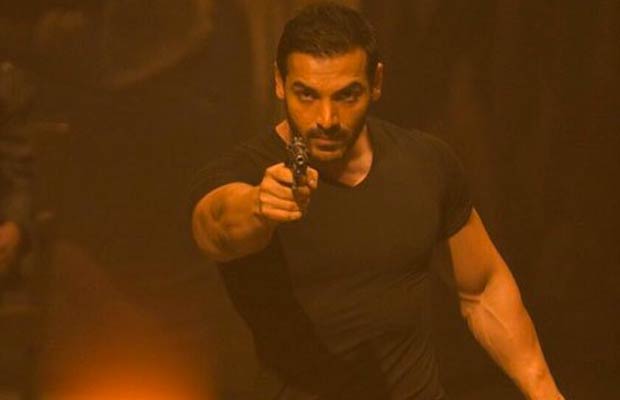 [tps_footer]Bollywood’s handsome hunk John Abraham is back with his tough and rough role in and as ‘Rocky Handsome‘. Finally, the much-awaited trailer of John Abraham starrer ‘Rocky Handsome‘ is out and is already gripping us with each and every action scene in the trailer.

The trailer of ‘Rocky Handsome‘ is exactly what you would expect it to be. John Abraham is looking killer with ample view of his biceps, eight pack abs and intense action scenes. The trailer of the film showcases the emotional connect and a relationship between a man and a girl. The film’s story revolves around a man who sets out to take vengeance against drug mafia after they kidnap an eight-year-old girl, with whom he shares a special bond. The little girl is totally scene-stealer and is already grabbing all the attention in the trailer itself.

Also, Shruti Haasan who is seen playing John’s wife in the film, is looking beautiful and breathtaking like always. Apart from action, John and Shruti’s romance and bold scenes in the trailer are giving an edge to the film.

The trailer of the film is eerily similar and reminds you of Salman Khan’s Bajrangi Bhaijaan, which was also all about a man and a little young girl. Similarly, John is a man who goes on a rampage to protect the little girl in ‘Rocky Handsome‘.

Now all the eyes are on what the film has on cards for the audiences in the theatres. Directed by Nishikant Kamat, the film stars John Abraham and Shruti Haasan in lead roles. It is an action thriller movie co-produced by John Abraham under his home banner John Abraham Entertainment with Sunir Khetrapal’s Azure Entertainment. The film releases on March 25, 2016.