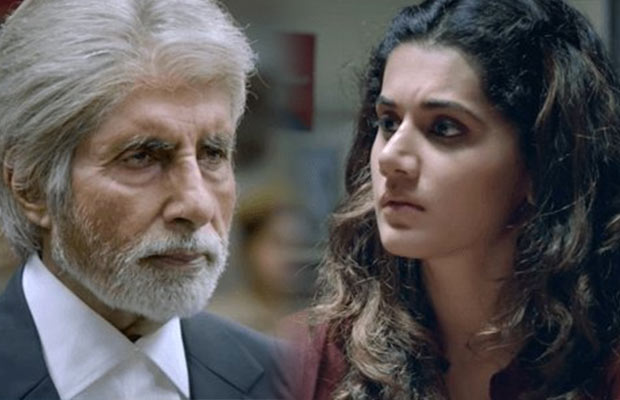 Amitabh Bachchan and Taapsee Pannu will team up for the intense film ‘Pink’. Helmed by Shoojit Sircar, ‘Pink’ is a dark film with an intriguing plot. After the tricky logo, the trailer of the film is now launched. Amitabh Bachchan will play the role of a lawyer in the movie. The first glimpse will surely shock you to the core with its massive twists.

‘Pink’ also stars actors Angad Bedi, Kirti Kulhari, and Andrea in lead roles. The glimpse is confusing to all limits with a high dose of suspense.  The trailer is extremely dark and starts with Big B’s startling question are you a virgin miss Arora?’ The said statement itself reveals that the film is very serious with no loose plots.

The trailer revolves around a mystery which makes you question at each stage. The characters in the glimpse are extremely realistic and make you curious at every passing minute. ‘Pink’ is a social thriller in larger terms.

The glimpse is fast paced with blame games, court arguments, kidnapping, and arrests. The trailer itself reads “A dark truth they can’t hide.”

‘Pink’ is undoubtedly going to be an eye-grabbing one with its deeply entangled plot. The film will mark the directorial debut of Aniruddha Roy Chowdhury. ‘Pink’ will hit the screens on September 16th, 2016.