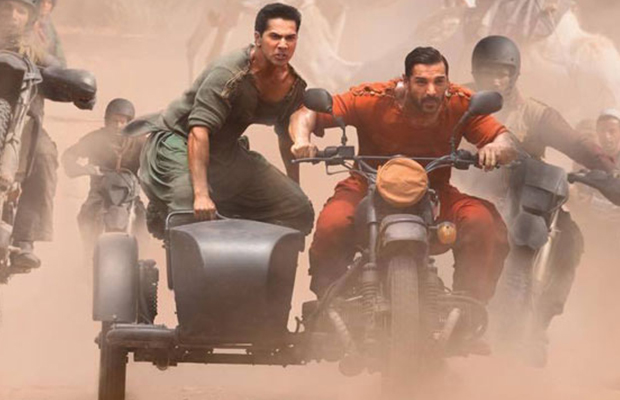 [tps_footer]Varun Dhawan, Jacqueline Fernandez and John Abraham will soon flaunt their action side in the film ‘Dishoom’. The film is going to action filled and will also have its share of entertainment and punch lines. The three actors will also nail their comic timings in a few scenes. The movie is aiming to be a complete power packed film with all the elements.

The making of the film ‘Dishoom’ is breath-taking by all means. The behind the scenes footage has finally released and it will surely make you go bonkers. Shot in the mysterious places of Morocco, the film is not just going to be worth watching for its star cast but it will also be filled with wonderful locations.

With risky action sequences and risky locations, ‘Dishoom’ making is going to raise the curiosity for the film. A particular scene in the film is shot in the same place where beloved series Game of Thrones was shot. Varun Dhawan who will play one of the main leads confessed on this common element between Game of Thrones and ‘Dishoom’.

The behind the scenes sequence depicts one of the most difficult shots in the film. Varun in his balancing act with the two vehicles side by side steals the show. Moreover, John is a perfect in his rider image.

With loads of bad men, pythons and other deadly elements ‘Dishoom’ is presumably going to be adventure filled.

The film is much in the news for its just released song ‘Jaaneman Aah’. The track features Parineeti Chopra and Varun Dhawan.