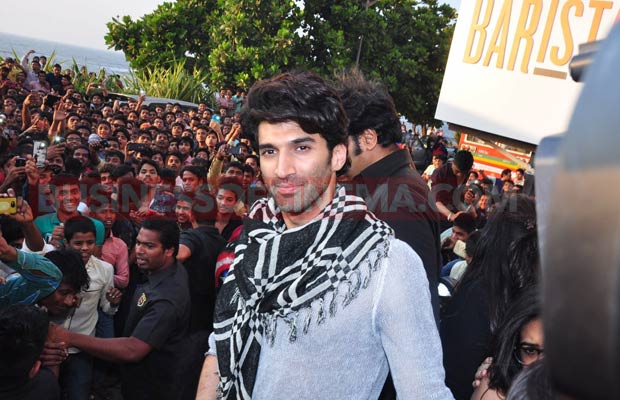 [tps_footer]Fans waiting outside Shahrukh‘s Mannat or Salman‘s Galaxy apartment is a usual sight, if you happen to be at Bandstand in Bandra, but yesterday Bandstand came to a standstill and it wasn’t because of the Khans from Bollywood.

Aditya Roy Kapur had dropped into a coffee shop on Bandstand to meet his fans and as soon as this news of Aditya‘s presence spread around the vicinity, a huge crowd gathered outside the Coffee shop to catch a glimpse of Aditya, bringing Bandstand’s traffic to a stand still.

Aditya, who is busy promoting his upcoming film – ‘Fitoor‘, specially got some time out to interact with his fans.

This Meet and Greet with Aditya was one of its kind, as this interaction was exclusively for Aditya‘s girl fans..

Aditya loved every bit of interaction and was surprised by special gestures of his female fan brigade.

Aditya will be seen next in his upcoming film -‘Fitoor‘, in which he has been paired opposite Katrina Kaif for the very first time.