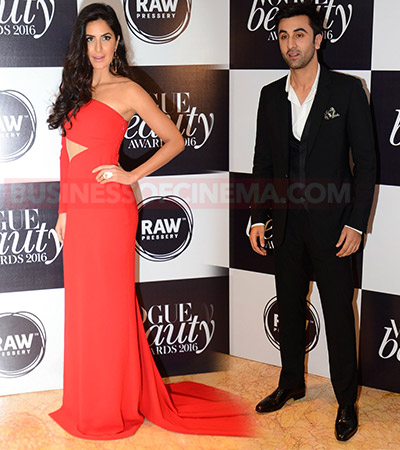 [tps_footer]Bollywood stars manage to stay fit, flawless, diet free and much more between their hectic shooting schedules. Despite long shooting schedules, these stars managed to stay fit yet beautiful and it was time to honour them for their efforts at the Vogue Beauty Awards 2016. Bollywood stars Katrina Kaif, Ranbir Kapoor, Parineeti Chopra, Mahira Khan, Aditi Rao Hydari, Ileana D’Cruz and many others were also present at the event that took place yesterday at Taj Lands End hotel.

The event saw oomph of glamour and different styles. But apart from that, each and everyone’s eyes were on the estranged couple, Ranbir Kapoor, and Katrina Kaif.  The two stars who bagged the 2016’s Beauty Of The Year award in male and female category respectively, smartly ignored each other. Photographers were waiting for the moment to take pictures of them together, but this could not happen as Ranbir and Katrina made sure that they don’t cross each other’s path.

According to what we hear, Ranbir Kapoor arrived early at the event while Katrina arrived after an hour when Ranbir had left from the event already. Looks like, Ranbir and Kat made sure that they don’t come face to face and show the world, the real awkwardness between each other post their breakup.

Lovebirds Ranbir and Katrina, who were dating for 6 years, have called it ‘quits’. It seems things have gone worse between the two and there seems to be no chance of reconciliation. Well, their profession keeps them to be together and so they will be seen together soon at the promotions of their upcoming film Jagga Jasoos. We hope the two take their first step together and patch up!