[tps_footer]By now we all are aware of Bollywood actor Salman Khan and singer Arijit Singh‘s tiff that has left everyone talking about. The tiff between the two happened three years back in 2014 and it’s quite shocking to know that their fight is still on. While there are no hopes of patch up between the two, singer Mika Singh said that he will speak to fellow singer Arijit Singh regarding the controversy related to Salman Khan.

At a recent event, Mika Singh said, “I have decided to discuss this when I will meet Arijit. However, I feel Arijit is quite young and maybe he has done a mistake unintentionally. Several times, we express ourselves on the award functions, but later we realize our mistakes.”

Mika added, “I think it is a very small thing. My best wishes to Arijit. He should concentrate on his work. He is a very brilliant and a talented singer in Bollywood.”

It all started when Arijit Singh released an open letter on his Facebook page requesting Salman to retain the version of the song, which he sang for Salman Khan’s film Sultan. In the letter, singer Arijit Singh has mentioned that he has been texting and calling Salman Khan to apologise for unintentionally leaving Salman furious at an award show in 2014.

Well, Arijit tried his best to sort his problems with Salman but it all went in vain. In fact, his song from Sultan was chopped off and instead song “Jag Ghoomeya” was given to Rahat Fateh Ali Khan.

Talking about his song in Salman Khan’s Sultan, Mika said, “I would like to thank Vishal-Shekhar, Aditya Chopra, big bro Salman Khan and Yash Raj Music for giving me a beautiful song. I think I have sung such a lovely song after a long time. It’s a fast romantic song and titled ‘440 Volt’. I hope people will love that.”

Directed by Ali Abbas Zafar, Sultan stars Salman and Anushka Sharma in lead roles and is all set to release this year on Eid. 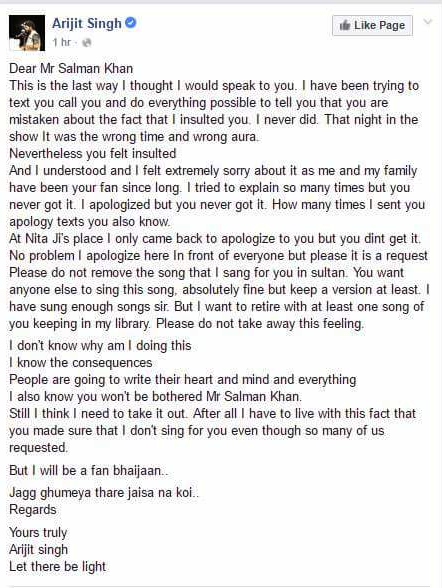