Bollywood’s two superstars Shah Rukh Khan and Salman Khan as we all know are foe turned friends now. It’s not so long when these two actors had a ugly spat at a party and now years after the duo are seen praising each other publicly.

Shah Rukh Khan who celebrated his 50th birthday yesterday, had got a special message from Salman Khan. The Being Human star wished SRK for his amazing life and good health. Was that enough? That wasn’t enough, Salman Khan personally visited SRK’s residence last night where the duo were seen hugging each other. Not only that Salman Khan also taught few Sultan wrestling moves to SRK.

Also Read: Watch: Shah Rukh Khan And AbRam Stepped Out In The Balcony To Greet Fans!

Sharing the same pictures, Shah Rukh Khan took to his twitter handle to share about the same. He captioned the pictures as, “Bhai teaching me the moves for Sultan on my birthday.” 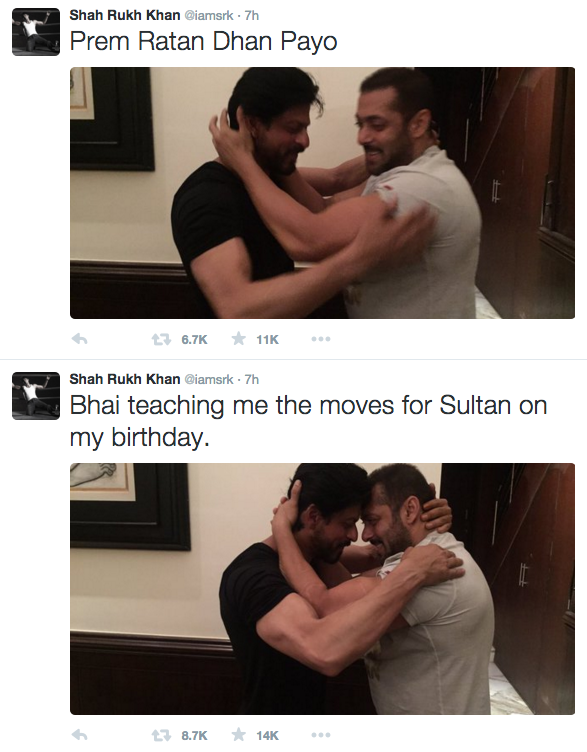 Well, yesterday Shah Rukh Khan’s birthday celebrations were not less than his larger than life movies. While addressing to media and fans at the 50th birthday bash, Shah Rukh Khan thanked Salman Khan for the wonderful wish that he got from him. He said, “ I Love Salman Khan. He’s a Stud. I Also Want Salman Khan’s Kid to Take his Name Forward.”

Gear up guys, its double treat this Diwali!

Also Watch: AbRam Waving To The Crowds Like His Dad Shah Rukh Khan On 50th B’day