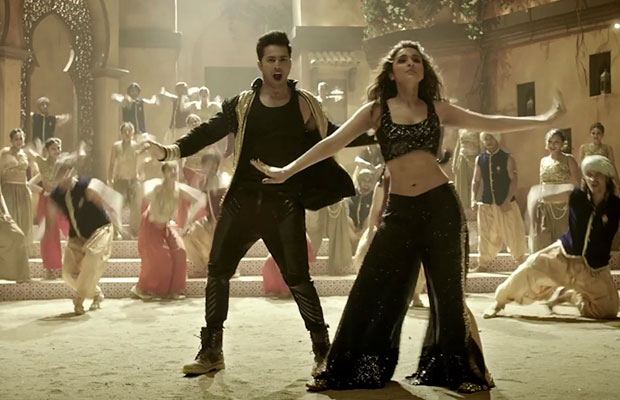 [tps_footer]Varun Dhawan and Parineeti Chopra have finally teamed up on screen. Varun will soon be seen in the film ‘Dishoom’. The film also stars actors Jacqueline Fernandez and John Abraham in lead roles. In a surprise glimpse, Parineeti will also be seen in the film. The chirpy actress is seen in an item number in the film along with actor Varun.

The teaser of the song is revealed and is surely foot tapping. Parineeti who has always been the girl next door is flaunting her dancing skills in the track. The actress with her toned body is killing the lenses with her moves.

Matching her steps with Varun Dhawan, the two actors are nailing their energetic performance. The track is titled Jaaneman Aah. The teaser of the song is catchy enough to entertain. Both Varun and Parineeti’s candid dance style is marvelous.

Parineeti Chopra is seen in black curvy attire, whereas Varun has coordinated the color of his attire with the actress.

‘Dishoom’ directed by Rohit Dhawan is an action oriented film. The movie will hit the screens on July 29th, 2016. Well, with Parineeti’s surprise item song the film is surely in the limelight yet again! Prior to Jaaneman Aah, Jacqueline‘s track Sau Tarah Ke was much in the news.