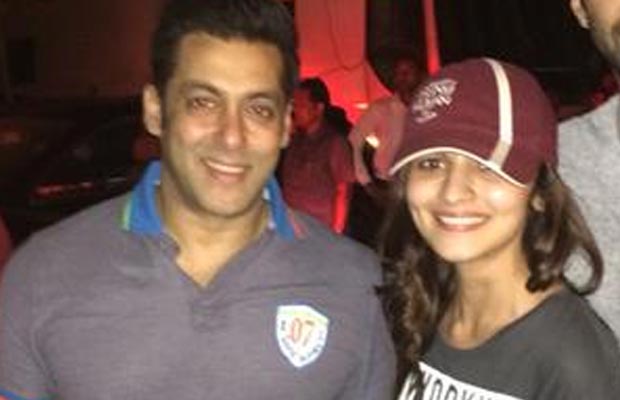 Alia Bhatt might be still called a fresher in our film industry but this cute diva has made a mark in the hearts of the audience and directors by her performances. She has proved to be a reliable actress who completes her work with commitment and is highly appreciated by the audience resulting in great box-office collections.

Well, looks like finally the young and petite star has come out of her shell and admitted her desire to work with one of the famous Khan’s of our industry. She openly in a press meet admitted blushingly that if given a chance, she would love to romance Salman Khan on-screen. She desires to work opposite the Dabaang star and dance around romancing this handsome bachelor hunk of our industry. Well we can’t blame Alia for her choice after all Salman is desired by many in fact most female stars of our industry thanks to his looks, charm and his fan following.

It might come to many of us as a surprise, but if sources are to be believed, Salman Khan too is pretty interested in working with Alia Bhatt. It is quite a rare incident when we see Salman admit his desire of working opposite a young female co-star. His wish was quite evident on the sets of Jhalak Dikhhla Jaa Reloaded when he pleaded director Karan Johar to take him back in the movie Shuddhi starring Alia.

Also Watch: Alia Bhatt Speaks Up On The Jokes On Her General Knowledge