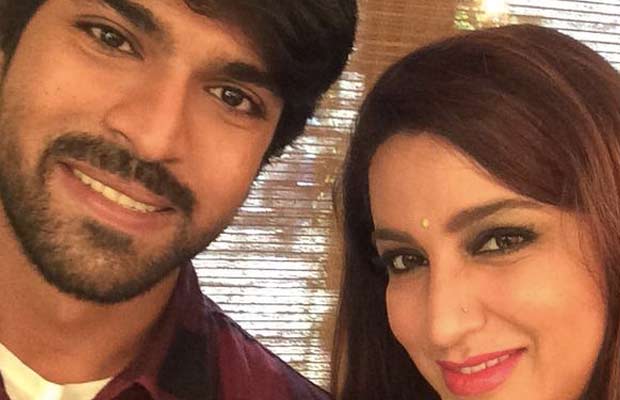 Bollywood actress Tisca Chopra who has dazzled us with her performances in films like ‘Taare Zameen Par’ is all set to make her debut in the Tollywood industry. And the actress is working with none other than Telugu heartthrob Ram Charan in his upcoming film ‘Bruce Lee’ where he plays the role of a hardcore Bruce Lee fan. Tisca shared a snap of her with Ram recently breaking the news to everyone.

Tisca Chopra took to her Twitter handle and wrote, “Here is the much asked for selfie with #RamCharan #BruceLee” Well definitely the great stars look dashing together in the photo! Tisca will apparently be playing the role of a rich powerful woman in the film. Tisca who has previously worked in various film industries like Marathi, Malayalam and Tamil will be entering the star studded Tollywood industry with Ram Charan’s flick. Reportedly the actress aced her Telugu lines with the help of her trainer.

‘Bruce Lee’ revolves around the life of Ram Charan’s character who is a professional action choreographer. Actress Rakul Preet Singh will be playing his love interest and Kriti Kharbandha will be seen essaying the role of Ram’s sister in the film. It also stars actors Brahmanandam, Arun Vijay, Sampath Raj, Nadhiya, Brahmaji, Rao Ramesh and Amitash Pradhan. Ram Charan’s father, superstar Chiranjeevi will also be appearing in the film for a small role. The film is set to release on October 15, 2015.

Tisca Chopra has done amazing films like Aamir Khan starrer ‘Taare Zameen Par’ for which she won several awards. She has appeared in ‘OMG: Oh My God!’, ‘Qissa’, and the recently released films ‘Rahasya’ and ‘ABCD 2’. She will soon be seen in the film ‘Ghayal Once Again’ starring Sunny Deol, Om Puri and Soha Ali Khan. Well we are definitely excited to see Tisca in her Telugu avatar!