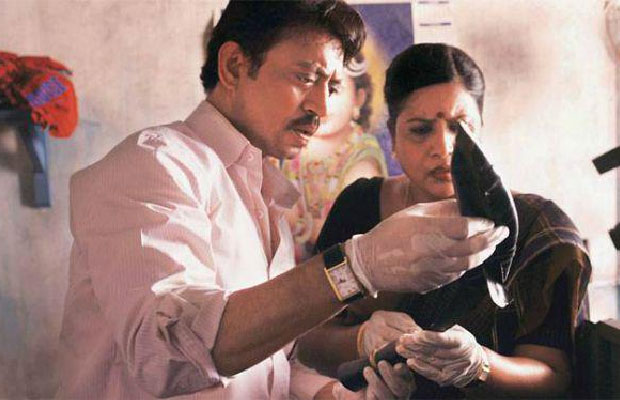 As an audience we are all too familiar with this story. We also know how it’s a case study on how not to conduct a murder investigation. Using a ‘Rashomon’ style of narrative, writer Vishal Bhardwaj and director Meghna Gulzar explore a double murder from three perspectives. Sticking quite close to the facts of the Noida double murder of teenager Aarushi and the male house help, the writers have changed names and few crucial details to recreate the scene. These are explored through the eyes of the police and two CDI (CBI with name changed) teams who investigate who might have been responsible for these chilling murders.

Fourteen-year-old Shruti (Ayesha Parveen) and the male domestic help are found murdered in the house. The only other two people in the house are alive. While suspicion first falls on the domestic help, it shifts to the parents when the servant is also found dead on the terrace. The police is shown to be inept, distracted, disinterested leaving the crime scene contaminated and compromised.

The case is then transferred to the CDI with investigations led by Ashwin Kumar (Irrfan Khan). After a slow start, this is when the narrative gains momentum. The most interesting scenes are of the CDI investigation, which finally gives the film a semblance of suspense and drama building to a tasty interval point. But once more the narrative flags, picking up again only in the climax to deliver the best scene of the film. One of the best and most electric scenes comes towards the end, as the two opposing investigating teams engage in verbal sparring, challenging each other’s findings and conclusions. In a telling line, Kumar says isn’t it better that 10 guilty go free that one innocent being wrongly convicted.

Also Read: Here Is Why The Teenage Girl From Talvar Has Been Kept Under Wraps

The script has many of the expected clichés — an intrusive media, inept police,  inter- and intra-departmental power play etc. There’s also a dispensable side plot of Kumar’s crumbling marriage (to Tabu).

While your heart lurches for Sen Sharma’s Nupur Tandon, Neeraj Kabi’s Ramesh Tandon is a shade too guarded, failing to connect emotionally with the viewer. ‘Talvar’ is as much a triumph of the performances as the research and the careful crafting of a script that gives the appearance of effortlessly piecing together the possibilities. It clearly shows what a judgmental, moralistic and prejudiced world we live in where biases creep in and slap accusations on the innocent. It leaves you with the question: in the face of media, societal and institutional pressure and partial investigators, how much room is there for real justice?