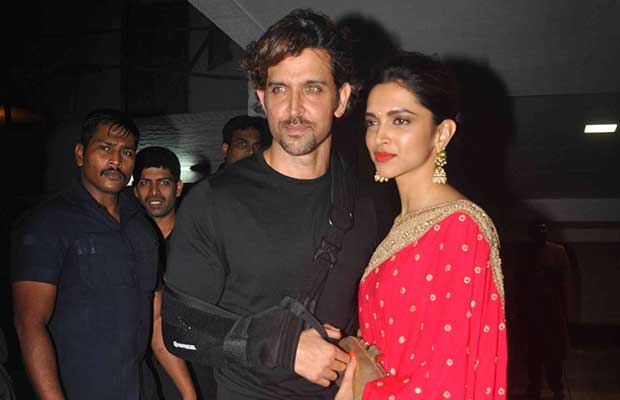 Bollywood star Deepika Padukone finally gave us an answer about working with Hrithik Roshan in ‘Aashiqui 3’. Ever since it was announced that Hrithik will be the next edition’s hero, speculations of lead heroine have started doing its rounds. The latest name that surfaced was of Deepika who is currently busy with her film ‘Tamasha’. Deepika responded and made it clear that all of it is just talks and that she hasn’t confirmed anything yet.

Deepika Padukone put a rest to the speculations by clarifying that she has not said yes to ‘Aashiqui 3’. When she was asked if she is going to pair up with Hrithik Roshan in any of the films the actress denied that as well stating that nothing of that sort has come her way yet. Deepika stated she is working only on two projects currently, ‘Tamasha’ and ‘Bajirao Mastani’ and that she is reading other scripts currently but has not said yes or signed anything new yet.

Well, it would surely be a great thing if we get to see Deepika and Hrithik starring in any of the films. As Hrithik’s previous jodis with Bollywood’s long-legged divas has been a huge hit including Aishwarya Rai Bachchan and Katrina Kaif. Surely Deepika Padukone would also look great on screen with Bollywood’s Greek God. Whether or not that happens in ‘Aashiqui 3’, only time will tell!

Hrithik Roshan is currently busy with Ashutosh Gowariker’s venture ‘Mohenjo Daro’ which is a periodical love story. The film will see newcomer Pooja Hedge opposite the handsome hunk. Deepika Padukone‘s ‘Tamasha’ starring Ranbir Kapoor is setting B-Town on fire with its trailers and promos and is set to release on November 27, 2015. While ‘Bajirao Mastani’ is set to release on December 18, 2015.