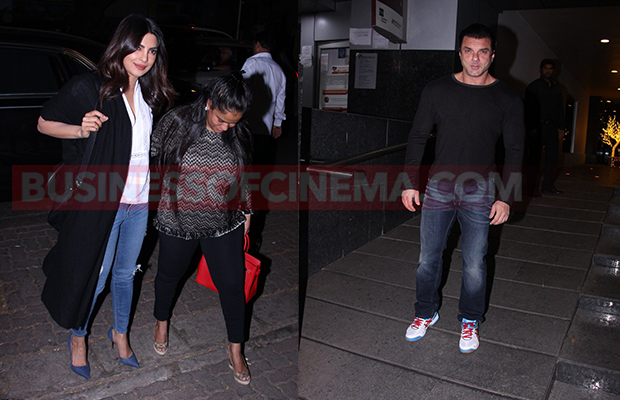 Bollywood actress Priyanka Chopra is back to Mumbai and has all the reasons to party! The actress was spotted partying last night with Salman Khan’s siblings Arpita Khan Sharma and Sohail Khan. The trio was spotting leaving from Hakkasan, Bandra after the party. Also, as it was Sohail Khan’s birthday, the trio planned for a dinner party.

Priyanka like always looked pretty in ripped jeans with a white sheer collared top. The actress was all smiles and posed for the shutterbugs with Arpita Khan Sharma before getting in her car. Reportedly, the party did not end there as they decided to continue the party at Arpita Khan Sharma’s house. The trio along with others friends of Arpita partied until wee hours of the morning. Talking about Sohail and Priyanka Chopra’s friendship, the duo shares a good rapport, as they have worked together in films like God Tussi Great Ho and Salaam-E-Ishq. It seemed to be a fun-filled night for Priyanka Chopra!