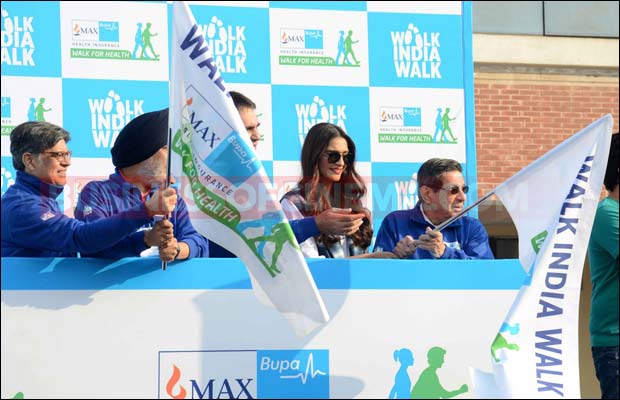 [tps_footer]Bollywood actress Sonam Kapoor, who has geared up for the release of her upcoming film ‘Neerja’, attended the launch of Neerja Bhanot’s biography in New Delhi. Sonam Kapoor is playing the role of Neerja Bhanot, which is based on the life of senior flight attendant ‘Neerja’, who was murdered while saving 360 passengers from terrorists.

Sonam Kapoor, who was in Delhi for the launch event, looked absolutely stunning and classy in a red Ferragamo dress. With red outfit and thigh high boots, the fashionista nailed it yet again with her amazing style. She finished out her look with high bun, sunglasses and handbag.

Sonam Kapoor, who is a fitness freak, also spoke on health regime. “I think it is great that health and fitness is top of mind for everyone across age groups, be it the young or old. People now understand the value of maintaining a healthier lifestyle by exercising and eating right,” Sonam said in a statement at event in Delhi.

On the other hand, the actress was also clicked promoting her film ‘Neerja’ at a Marathon event in Delhi. Dressed in white long shirt with black bottom, long jacket and thigh high boots, Sonam looked gorgeous liked always. Keeping her look chic, Sonam finished out her look with soft curls open hair, handbag and red lip.

Directed by Ram Madhvani and produced by Atul Kasbekar, ‘Neerja’ showcases how the young flight attendant fought for the lives of her passengers. The film is scheduled for release on February 19, 2016.[/tps_footer]