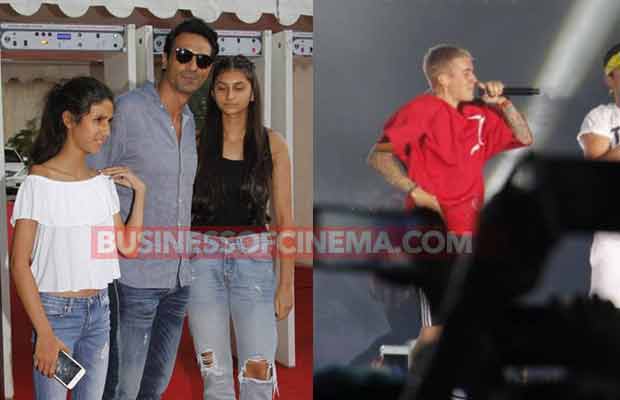 Angry Arjun Rampal walks out of Justin Bieber Concert along with his two daughters. Read to know why!

Grammy Award winning Canadian singer Justin Bieber performed to a stadium full of thousand fans at DY Patil Stadium, Navi Mumbai. It was sheer madness as the “Baby” singer took the stage in India for the first time last night. His fans waited for hours altogether in scorching heat to watch him perform and looks like it was worth the wait. Fans just could not hold their excitement and were constantly sharing pictures and videos of Justin’s performance from last night’s concert.

The excitement was not only among the die-hard fans but even Bollywood stars relished Justin’s performance. However, many left disappointed for some or other reason. While Sonali Bendre was upset with the management of the concert, Bipasha and Karan Singh Grover walked out within 5 minutes on not getting proper security.

Now according to a report on Spotboye.com, Bollywood actor Arjun Rampal, who graced the red carpet of Justin Bieber’s concert with his two daughters, also stepped out and headed back home. As reported by the entertainment portal, Arjun who was accompanied by daughters Mahikaa and Myra was speaking to media persons at the event. While he was talking to media, a few photographers tried getting closer to Mahikaa and Myra to click their pictures.

The irked father immediately halted the interview and pushed the photographers away, and walked out of the venue along with his daughters. The report also reveals that the actor later did not step back to the concert after seeing a huge crowd falling on each other.

Many other star kids were also seen attending the much-talked concert. Malaika and Arbaaz arrived with their son Arhaan. Sridevi and Boney Kapoor attended with their daughters, Jhanvi and Khushi Kapoor. Sonali Bendre attended with her two kids.

The security was beefed up for the concert and for the artiste. Around 500 policemen were deployed, while Bieber had Bollywood superstar Salman Khan’s personal bodyguard Shera on duty.

Bieber landed here on a chartered flight early on Wednesday. During the day, a string of videos available on social media gave a glimpse into how Bieber got a taste of his fandom on the streets while he was roaming around in a car.