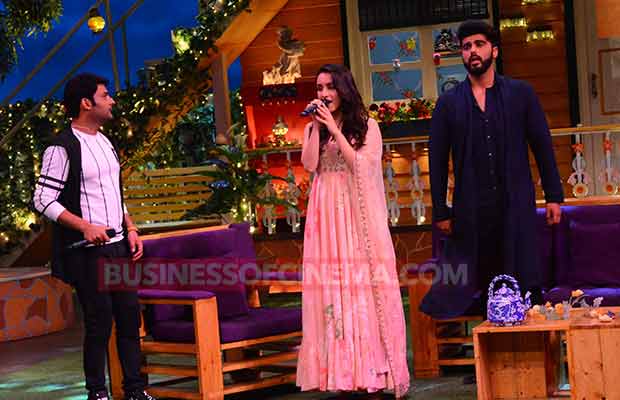 Shraddha Kapoor and Arjun Kapoor were spotted on the sets of The Kapil Sharma Show promoting their upcoming film Half Girlfriend.

The pictures suggest that Shraddha Kapoor and Arjun Kapoor had a blast on the Kapil Sharma show and also danced on some groovy music from their film.

Shraddha can be seen wearing a very elegant floral dress in which she looks simply adorable! She had recently commented about Arjun Kapoor saying, “I got to know him more after this film. He has worked very hard for Half Girlfriend and the day you all will watch the film, you will see that.”

Half Girlfriend is based on the bestselling novel of the same name written by Chetan Bhagat. The film is directed by Mohit Suri and has been shot in Delhi, Patna, Dumraon, Varanasi, New York City, and Cape Town. The film is slated for a worldwide release on May 19, 2017.

Shraddha Kapoor also sang ‘Tum Hi Ho’ with Kapil which she had also originally sung in her movie ‘Aashiqui 2’. Check the video here:

Shraddha will next start working on the Saina Nehwal biopic. Shraddha had tweeted about it saying,

“SAINA NEHWAL – The former World no 1 badminton player. An Indian girl. An inspiration to millions. A youth icon in the truest sense. Her journey to the top has been fascinating & I am honored to be given this opportunity to play her in my next film SAINA. The preparation for this film is going to be very, very challenging. It’s probably going to be my most difficult film till date. SAINA is going to be directed by Amole Gupte & produced by T-series.”

SAINA NEHWAL – The former World no 1 badminton player. An Indian girl. An inspiration to millions. A youth icon in the truest sense. @NSaina pic.twitter.com/ZvXfAp7X7J

Other than this, the actress will also be seen in Haseena: The Queen of Mumbai, which is directed by Apoorva Lakhia and produced by Nahid Khan. The film is based on terrorist Dawood Ibrahim’s sister Haseena Parkar. The film marks Shraddha Kapoor’s first female protagonist venture as she is essaying the title role.