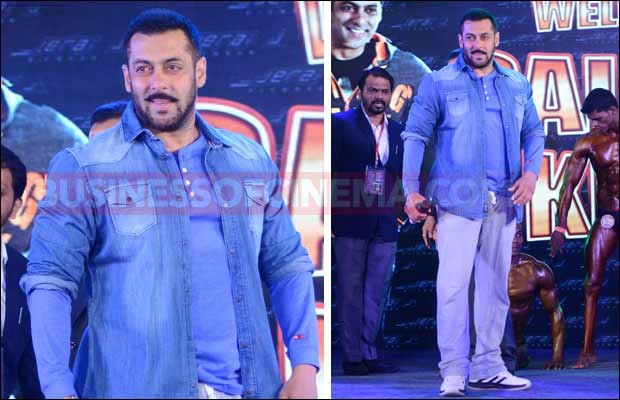 [tps_footer]Salman Khan who is currently shooting for Ali Abbas Zafar‘s Sultan, took some time out to felicitate body builders. Salman was spotted at the Fitness Expo yesterday, as the guest of honour for a competition for physically disabled athletes.

The actor was present for a competition for physically disabled athletes. Salman who has beefed up for his character in Sultan was humbled by the unique competition, and congratulated everyone for their hard working and committed participants.

Salman looked handsome in casual clothes, blue shirt paired with grey tracks and a jean jacket. Salman Khan who is known to be a fitness freak, was seen interacting with the contestants. Sham Singh Shera (Winner of the Disabled Category) was ecstatic to share stage with the dignitaries.

On the work front, after many speculations and long wait, finally Salman Khan’s upcoming film Sultan has got a leading lady. Yes, none other than Bollywood actress Anushka Sharma has been finalized as the lead actress opposite Salman Khan in Ali Abbas Zafar’s Sultan.

Directed by Ali Abbas Zafar and presented by Yash Raj Films, Sultan is based on wrestling. It already gives the audience an idea that this is not an ordinary wrestling film. Also, Salman Khan has undergone through intense training for the film with daily 4-hour training session with action director Larnell Stovall. Larnell had specially arrived to India from Los Angeles to train the actor in wrestling and mixed martial arts. Sultan is slated to release next year on Eid.[/tps_footer]