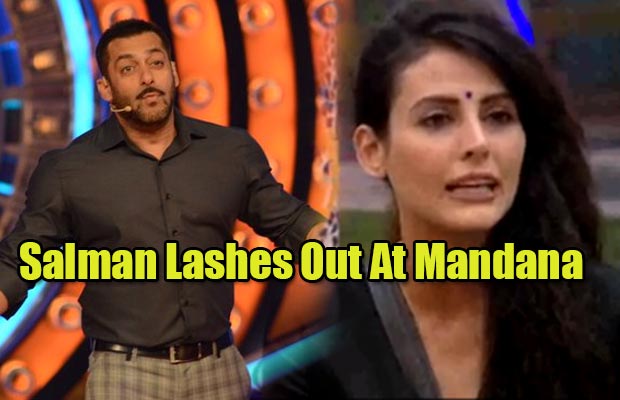 [tps_footer]It seems Salman Khan is no mood to take the silly behaviour of Bigg Boss 9 housemates. After slamming Prince Narula on ‘ticket to finale’ task, the Being Human star lashed out at Mandana Karimi after she made an unacceptable comment on wild card contestants, Priya Malik and Rishabh Sinha.

In the past week, Mandana Karimi had an ugly argument with Priya Malik over their cooking styles. During their ugly fight, Mandana told Priya that she is a wild card contestant and that she is not equal to other housemates in Bigg Boss 9 house. Well, this surely didn’t go well for Priya Malik, instead of arguing on the same; she challenged Mandana on being in the grand finale.

In tonight’s episode, you will see how Salman Khan gets annoyed over Mandana’s this statement. He questions Mandana on why she thinks wild card contestants are weak and not equal to other housemates. He also said that wild card entries are the best thing to happen in this house.

Mandana did try to give her explanation on the same, but the actor didn’t give her a chance to speak. Salman continued saying on how a wild card contestant feels un-welcomed in the house after a group is made. Mandana then chose to stay quite and told Salman that he is right and that she does not want to argue anymore. To which Salman Khan replied saying that this is the reason he appears on the show during weekend after a great study on all the happenings.

Nevertheless, as a part of the game, housemates have to go through ups and downs. But one thing is for sure, since six seasons Salman Khan has not spared any contestant for their wrong behaviour and is going to continue even in this season, thought the housemates are inching close to finale.