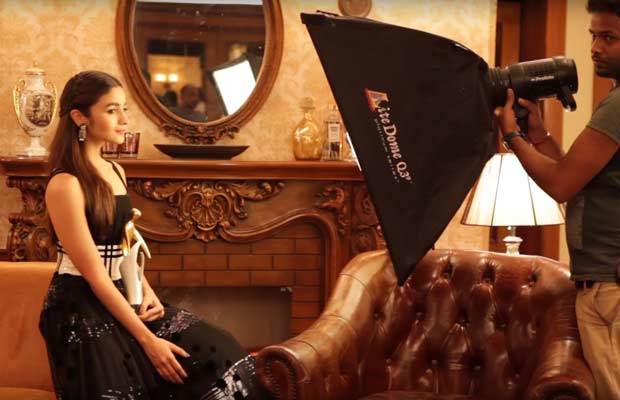 The stars of the tinsel town not only were at their stylish best, but also had loads of fun during the shoot. The behind the scenes footage of the shoot sees actress Athiya Shetty initially flaunting her élan to the fullest. The new entrant is surely paving a huge way to stardom with her killing looks and expressions.

The shoot also sees glam doll Jacqueline Fernandez in a cheerful avatar. The diva is a treat to the lenses not only while posing, but also when the cameras are not flashing. Jacqueline is seen looking ravishing in her heavily embellished attire. The actress was also joined by filmmaker Kabir Khan who earned laurels for his blockbuster hit ‘Bajrangi Bhaijaan’.

The surprise to the lenses was none other than Dabangg actress Sonakshi Sinha. The mind blowing star shared the frame with Jacqueline and posed magnificently. Sonakshi looked amazing in her blood red attire.

Nevertheless, the beauty who stole the show was senior actress Rekha. The diva who is called the timeless beauty of the industry was shot in her staple heavy laden ethnic attire.

Adorable actress Alia Bhatt looked cute as always in her not so painstaking design. The actress was all chirpy and candid during the shoot. The Bajirao of the industry Ranveer Singh who is always up for something spontaneous graced the shoot with his full energy. The entertaining actor was looking all up to date in his formals.

Ranveer Singh broke the monotony of the attire by wearing black framed spectacles. Style icon of the B—town Sonam Kapoor entered the shoot with utmost grace. The actress was seen in an off shoulder attire and was greeted by none other than King Khan Shah Rukh Khan. Shah Rukh Khan shared the frame with Sonam Kapoor and Alia Bhatt.

The Filmfare cover for Glamour and Style is surely incomplete without handsome hunk Varun Dhawan. Not only did the two actresses join our Badshaah Shah Rukh Khan, the actor was also joined by Varun Dhawan.

Well, we can’t wait to see the actual cover of the same with so many mind boggling stars!

Watch Behind The Scenes Video Here: