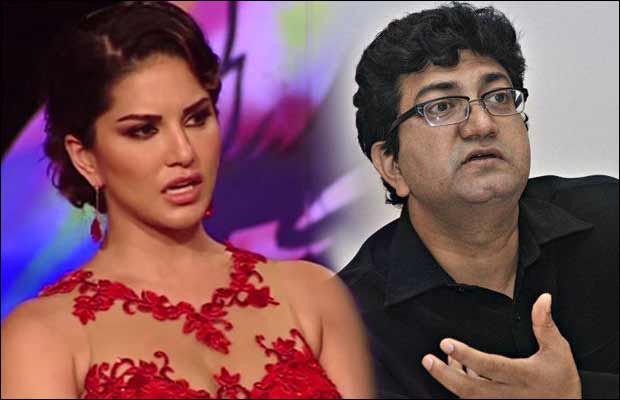 [tps_footer]Sunny Leone is earning all the applauds for her brave face lately. Yet again the sensuous actress has done something commendable. As we all know Sunny’s recent television interview gained all the limelight when the host disrespected her career choices. The interview also features the stance where it was said that actors like Aamir Khan would never work with her (Sunny Leone). However, perfectionist Aamir was instant in clarifying that he would love to work with Sunny Leone.

Celebrated writer Prasoon Joshi recently was present at the 10th anniversary of ‘Rang De Basanti’. The platform was graced by almost the whole team of RDB including Aamir. The question about Sunny Leone was raised at the celebration too, and was directed at the Dangal star. However, writer Prasoon Joshi couldn’t stop himself from giving his opinion about the same.

The talented writer was evidently not supportive of Sunny Leone and further commented, “I don’t respect Sunny Leone’s profession. I wouldn’t want our youth to get inspired by her profession. But because of that to make a person feel as an accused and disrespect her is not something that one should do. But this should not be taken to mean that if someone is a drug dealer by profession that should be seen as his personal work. I will not respect that profession. And I will say that you shouldn’t be doing this. But that doesn’t mean that when that comes before me will I disrespect him or her. I wouldn’t.”

The writer added, “My culture doesn’t allow me. But I will not praise her profession. If there is a profession which doesn’t play a constructive role in building a great society we need to criticise it as well. It’s a free society. People have choices to make, and if choices are not great those should be criticised. Somewhere one should draw a fine line.”

After the preachy stance, Sunny Leone who is turning all the positive heads lately for her adamant views and opinion was asked to reply on the comment made by Prasoon Joshi. The actress at her witty best said, “I don’t know who Prasoon Joshi is. I will google him and then I will comment.”

Sunny Leone’s wonderful reply has surely grabbed all the eyeballs yet again. The actress is currently gearing up for her upcoming film ‘Mastizaade’.[/tps_footer]