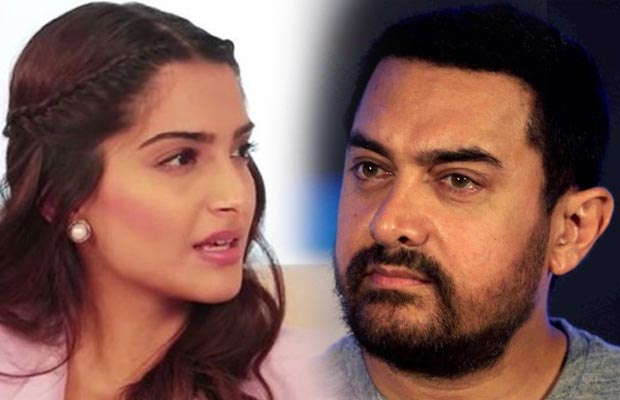 [tps_footer]Sonam Kapoor is one actress who is known for her dare devil statements and comments. Be it an opinion on any issue or a comment on any other contemporary, Sonam Kapoor speaks her heart out without any fear. This time Sonam has shown her gutsy side by speaking up on the much debated intolerance row.

Aamir Khan landed in a deep hassle when he commented that there is growing disquiet in the country. The PK actor invited more flak when he further stated that his wife (Kiran Rao) also suggested that they move out of the country as she is scared for the children. The following comment drew loads of opinions and comments from various entities and the issue became the most talked about one.

Many Bollywood celebrities refused to comment on the said issue but some declared their opinions freely. Prem Ratan Dhan Payo actress Sonam Kapoor nevertheless opened her heart out on the intolerance row at the Agenda Aaj Tak 2015.

The actress took the onlookers by surprise when she fearlessly opined her views on the intolerance issue. Sonam Kapoor firstly commented on the debate where Pakistani actors were supposedly banned from entering Maharashtra. Sonam on the same said, “For me, intolerance is a very broad term. I have faced racism in many countries. They see brown skin and they judge you. If people from our country can work

anywhere in the world, I don’t think there should be any problem that people from other country can’t work in our country.”

The highly talented actress further added, “I think art should be kept separate from politics. I have worked

with Fawad in Khoobsurat and I can say that he is a great artist. It is secondary that he is from Pakistan.”

Coming to the intolerance row, Sonam Kapoor said, “I think when a country is ready for dialogue and discussion, it’s great. We have seen all kinds of riots that have happened in the past 60 years. So, we can’t ignore the fact that there is intolerance.”

On taking the stance on the intolerance issue, Sonam Kapoor added that Aamir Khan’s statement has been quoted out of context. The actress confessed, “People have taken the statement out of context. Have you seen his entire interview or have you just picked out that one statement? It was just a living room discussion. He basically said that he is scared that this thought has entered his mind. I don’t think he was criticising anything. If he is expressing his fears, it doesn’t make him an anti-national. I think constructive criticism is always healthy. If someone is criticising my performance, it doesn’t mean that he hates me. It means he doesn’t like what I have presented on the screen. I think it’s very important to not take things to heart.”

The mind blowing actress Sonam Kapoor who lives life on her own terms further commented saying, “Aamir was just laying out his fears. Now, do you think he will ever speak about anything in public? So you understand why an intelligent man like Aamir is saying all this, rather than calling him an anti-national. Maybe what he said was too strong … but it wasn’t irrelevant.”

Well, seems like Sonam Kapoor is not just going to remain a fashion icon of the industry but the diva also has won many hearts for her strong views![/tps_footer]