Pictures from the sets of Sanjay Dutt’s Biopic show Ranbir Kapoor looking extremely similar to the other actor.

It is no news to us that the Bollywood actor Ranbir Kapoor has been working hard on another Bollywood actor, Sanjay Dutt’s biopic. The film, which stars famous female actors like Anushka Sharma and Sonam Kapoor, has Ranbir portraying the role of Sanjay.

Recently, we have got snaps of the Barfi actor from the sets of the film and we must say that his looks have left us totally amazed! The faraway shots of the actor make us believe it’s Sanjay Dutt himself.

His look from the sets is extremely similar to the ones which Sanjay was carrying during his paroles in the jailed period. He can be seen daunting a red teeka on his forehead, wearing a blue shirt and blue denims.

Ranbir, apart from the biopic, is also working with Alia Bhatt in his dear friend, Ayan Mukherji’s superhero film. He is also having his much-awaited film, Jagga Jasoos, releasing in July, which also features his ex-girlfriend, Katrina Kaif. 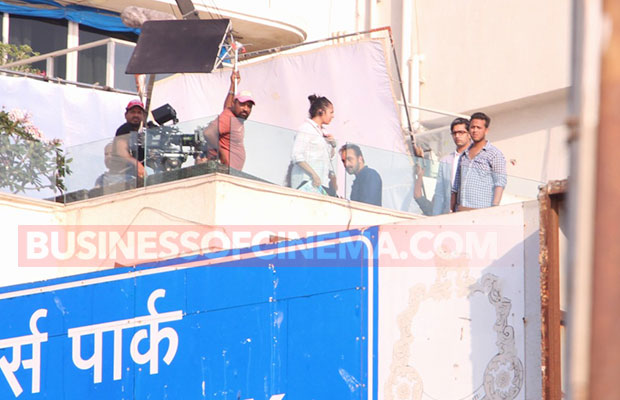