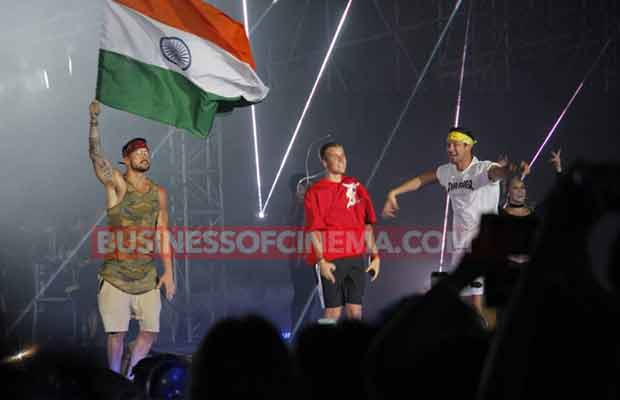 Grammy Award winning Canadian singer Justin Bieber performed to a stadium full of his fans, who were excited, emotional and euphoric as the “Baby” singer took the stage in India for the first time on Wednesday night.

The 23-year-old Prince of Pop is here as part of his Purpose World Tour, organised here by White Fox India, and sponsored by Jio.

“Hello India,” Bieber said to the crowd of Beliebers, who waited for hours altogether in scorching heat to watch him perform on a humongous stage enhanced by graphics as well as enlivened with startling fireworks and the rousing response of the audience.

“What a beautiful night for me as I am here in this beautiful country for the first timeaAnd you people are fav (favourite),” Bieber said at the D.Y. Patil Stadium here on a full moon night.

In the run up to the headlining act, DJ Sartek and DJ Zaeden set the ball rolling, paving the stage for Norwegian DJ Alan Walker, who has a huge fan following of his own.

There were fans dressed in black T-shirts with ‘BELIEBER’ written across them, and those flaunting tees with his photographs and even others with hoardings that read “We love you Bieber” and “Meri jaan” at the venue.

The crowd predominantly saw youngsters, but it was interesting to note how people had come from various parts of the country — and in groups — to witness the concert, one of the biggest in India in recent times.

However, media persons invited to cover the live show experienced difficulties in entering the venue. Even Bipasha Basu, who came with actor-husband Karan Singh Grover, didn’t seem to have a great time.

“All dressed up for nothing. Ha ha ha,” she posted on Instagram with one image of herself ready for the concert.

She then posted another image with Karan, and wrote: “So what we could not enjoy at the concert… Still it’s always fun with you my love. Thank you.”

The security was beefed up for the concert and for the artiste. Around 500 policemen were deployed, while Bieber had Bollywood superstar Salman Khan’s personal bodyguard Shera on duty.

Bieber landed here on a chartered flight early on Wednesday. During the day, a string of videos available on social media gave a glimpse into how Bieber got a taste of his fandom on the streets while he was roaming around in a car.

He met a group of underprivileged children on a bus and shook hands with them, as well as stopped over at a Starbucks outlet ahead of his much-hyped performance.

Bieber’s India plan includes a visit to New Delhi, Agra and Jaipur. His entourage apart, he has been accompanied by his mother Patricia.