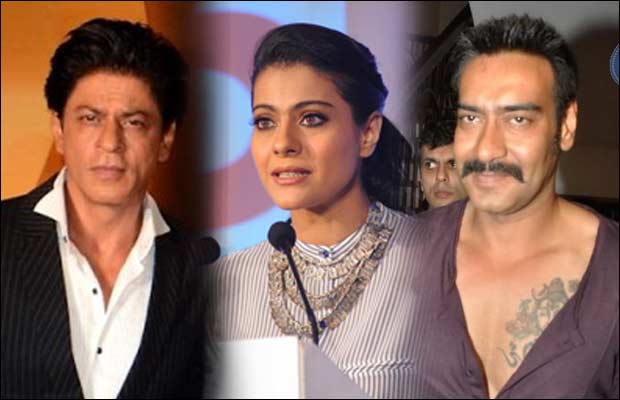 [tps_footer]Shah Rukh Khan and Kajol are all set to don the silver screen with their upcoming film ‘Dilwale’. The two stars are tagged as the most romantic on screen duo of the Bollywood industry. Shah Rukh Khan and Kajol are not only the most credible actors with their chemistry, but the two also share an amazing unbreakable rapport with each other off screen. Well, even though SRK and Kajol are the best buddies of the tinsel town, reports are always making a buzz about the tug of war between Shah Rukh and Ajay Devgn.

Kajol along with the cast of ‘Dilwale’ is currently spotted at every corner of the city for the promotions of the film. The highly talented actress is much in news for her make over. During a recent press meet, Kajol was asked to comment on the tricky rapport between SRK and Ajay Devgn. The expressive actress answered saying, “If two people are not friends, that doesn’t mean they are enemies. I have said this earlier also. Just because they don’t party together and you don’t see them clicking selfies, that doesn’t mean that they hate each other or bad-mouth each other. Yes, Shah Rukh is my friend and I have been very clear that my friends are mine and I have never imposed my friendships on Ajay and he has never done it either.”

Kajol, who is always confident in her statements further added, “We are both very clear about it. You need to give people that space. There are people who you are close to, that I may not be close to and that does not make them enemies. Recently, they met each other in Bulgaria and they have met before also at our home. I don’t think there is a discomfort, but I also don’t think there is any friendship either. But there is nothing wrong with that.”

Seems like, Kajol is now tired of clarifying the misunderstandings of the paparazzi regarding SRK and Ajay. Kajol will soon be seen opposite Shah Rukh Khan in the much awaited film ‘Dilwale’. The film is directed by Rohit Shetty and also stars actors Varun Dhawan and Kriti Sanon in lead roles apart from Kajol and SRK. ‘Dilwale‘ is all set to hit the screens on December 18th, 2015.[/tps_footer]