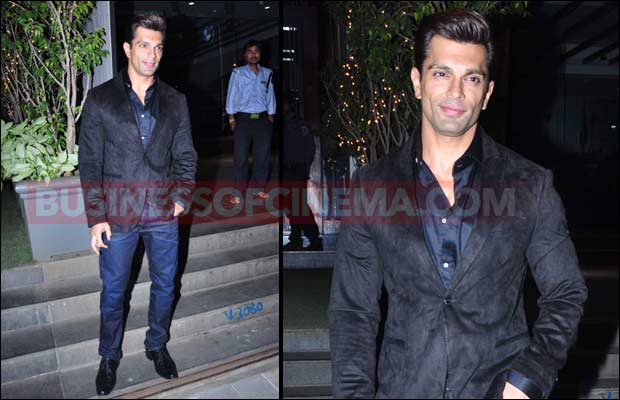 [tps_footer]Bollywood diva Kareena Kapoor Khan was spotted outside a popular bistro in Mumbai along with producer-director Vidhu Vinod Chopra and wife, film critic Anupama Chopra on December 12, 2015. Kareena was seen wearing a knee length black dress and stopped to pose for the shutterbugs outside the restaurant. The actress has worked with Vidhu Vinod Chopra in the past in the Raju Hirani directed ‘3 Idiots’.

On the same day, the rumoured couple of Bollywood Karan Singh Grover and Bipasha Basu were spotted leaving a restaurant in Khar area in Mumbai. Bipasha looked chic in a white shirt paired with black shorts and a black jacket whereas Karan looked handsome in a jacket and jeans combo. The alleged couple was recently also spotted at the special screening of Karan’s movie ‘Hate Story 3’. Bipasha loved the movie and was all praises about the same.

On the work front, Kareena Kapoor Khan will be seen in R Balki’s upcoming movie ‘Ki And Ka’ opposite Arjun Kapoor. Karan Singh Grover is on cloud 9 as his movie ‘Hate Story’ is one of the successful movies of 2015. Karan will be seen in Ankoosh Bhatt’s ‘3 Dev’ starring Raima Sen, Kunal Roy Kapoor and Kay Kay Menon, Bipasha is currently hosting a new horror show called ‘Darr Sabko Lagta Hai’ on &TV.[/tps_footer]