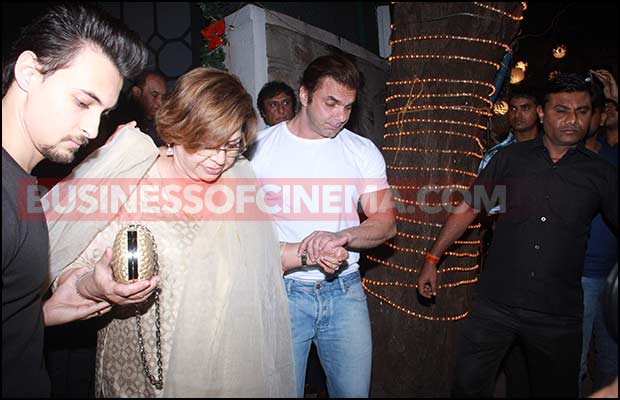 Bollywood actor Salman Khan’s big Khan-daan came together for a dinner party at one of the popular restaurants on December 24, 2014. The entire family- Salim Khan, Sohail Khan with wife Seema Khan, Salman’s sister Arpita Khan and brother-in-law Aayush Sharma, Helen were present at the dinner party. Actor Sanjay Kapoor and wife Maheep Kapoor were also the attendees at this family affair.

Sohail and Aayush were snapped helping Salim and Helen to get into their car after the party. Arpita and Aayush smiled for the shutterbugs as Aayush helped his pregnant wife walk down the stairs. Sohail wore a white T-shirt and blue denims, Arpita wore a printed dress, Aayush wore black on black outfit, Helen wore golden colour ethnic wear, Sanjay Kapoor was snapped in a black jacket while others were pretty dressed for the dinner. Though it was close family and friends’ party, Salman Khan, Arbaaz Khan and wife Malaika Arora Khan were missing from the celebration. Salman is busy shooting for his next release ‘Sultan’ whereas Arbaaz and Malaika are busy with their reality show, ‘Power Couple’.