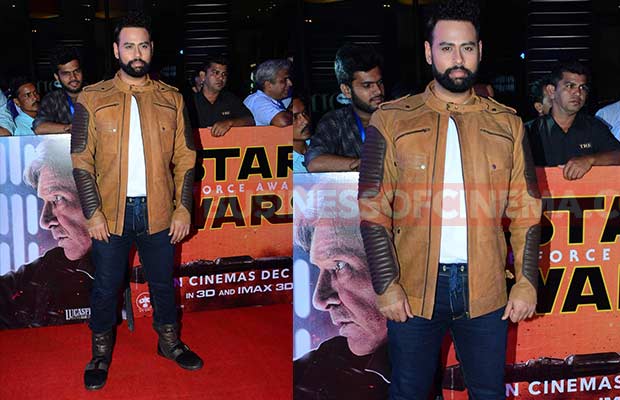 [tps_footer]Hollywood’s legendary space movie ‘Star Wars: The Force Awakens’ took over global box office by storm on December 18, 2015. After releasing worldwide, it is time for India to witness the ‘Star Wars: The Force Awakens’ on Christmas day December 25, 2015. Two days ahead of its release in India, Mumbai saw an exciting premiere at one the top multiplexes PVR Phoenix Lower Parel on December 23, 2015. Bollywood celebrities turned up for the special screening of this Hollywood movie.

‘Star Wars: The Force Awakens’ premiere began Darth Vader (the villain in the film) and his army of Stormtroopers marching in on the red carpet before guests arrived. Bollywood’s big names started to arrive at the premiere. Aamir Khan along with wife Kiran Rao and daughter Ira Khan were snapped together at the screening. Filmmaker and producer Raju Hirani, R Madhavan came to the screening. Kalki Koechlin, Rajkumar Rao, Amit Sadh, TV actor Karanvir Bohra, Eli Avram, Sonali Bendre with husband Goldie Behl and son, Girish Kumar and VJ Andy walked the carpet.  Saif Ali Khan’s son Ibrahim Ali Khan came to the screening along with some of his friends. The celebs were seen posing with lightsabers and Stormtroopers and seemed to enjoying a lot.

‘Star Wars: The Force Awakens’ that released on December 18, 2015 has already grossed more than $500 million and is steady heading towards the $1 billion mark. In India, the movie is scheduled to release this Friday December 25, 2015.