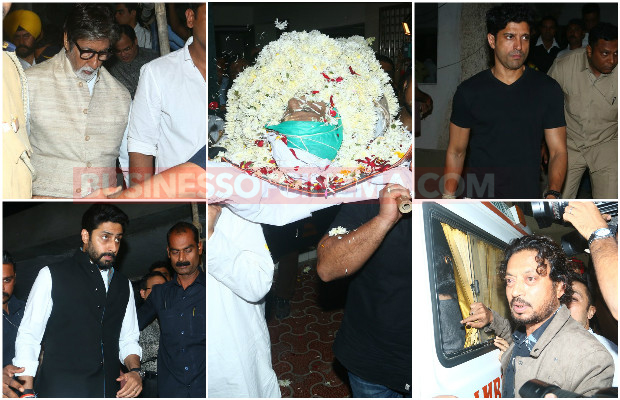 Om Puri, one of the most versatile and celebrated actors in India, died of a heart attack in Mumbai on Friday. He was 66. Diring an illustrious career spanning four decades, Om Puri acted in over 250 films, his popularity transcending borders and stereotypes. The sudden news of his demise shocked his fans and friends in Bollywood. While some chose to tweet their condolences, Amitabh Bachchan, Abhishek Bachchan, Shabana Azmi, Vidya Balan, Anupam Kher, Farhan Akhtar and others who were in the city visited the actor’s family to pay their respect.

One of the finest actors of Bollywood, Om Puri died of a heart attack in Mumbai on Friday morning. The news came as a shock for the fans and film fraternity and could not believe that one of the most versatile and celebrated actors of the industry is not amongst them now.

Big B arrived at the funeral with son Abhishek Bachchan. Amitabh Bachchan and Om Puri had worked in several movies together like Ghatak, Dev, and Lakshay. Kabir Khan arrived at the funeral with wife Mini Mathur. Om Puri was a part of his upcoming project Tubelight starring Salman Khan. In fact, Salman Khan and Om Puri were supposed to start shooting for the film in the coming days.