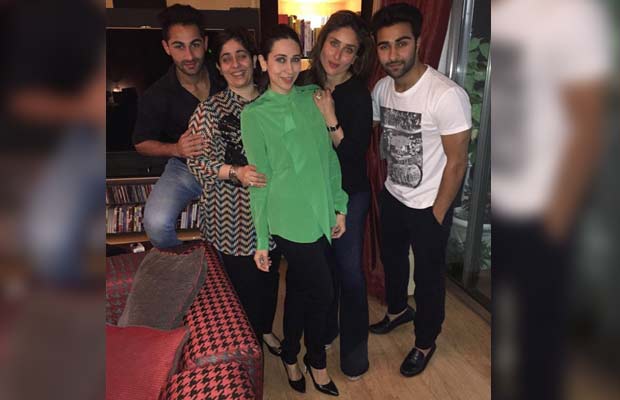 [tps_footer]It was such a beautiful day in proud father Randhir Kapoor‘s life, when both his beautiful and successful daughters became part of his 69th Birthday and made it a big, happy family affair to remember and cherish for the rest of the years of his life. So good to see them all together and having a good celebration, family time.

His birthday was not arranged in a luxurious hotel, in fact, this sweet celebration was kept intimate and warm, only for family members. Saif Ali Khan along with his Begum Kareena Kapoor Khan, Karisma Kapoor, Rishi Kapoor, Neetu Kapoor and many more family members filled in to make this birthday very special for “Birthday Boy” Randhir Kapoor. His smile and excitement for cutting the cake and seeing his family around him speaks volumes about his happiness and contentment of having a blissful birthday.

Randhir Kapoor, is the eldest son of Actor-Director-Producer, the ultimate “Showman” in the business of cinema, Raj Kapoor. Randhir couldn’t resist the glamour world and followed his father’s footstep and made a good career out of movies he did.

Randhir first appeared as a child artist in “Shree 420” (1955) and then his next movie was “Do Ustad”. He also became an assistant director for the film “Jhuk Gaya Aasman” starring Rajendra Kumar in 1968. This way he got the experience of working on screen and behind the camera that made him more sure about his passion for cinema.

After a gab of few years, Randhir Kapoor made his acting and directorial debut with “Kal Aaj Aur Kal” (1971) which also starred his wife, father and grandfather. This film was produced under the R.K banner and it was an average success. He was also part of hits like Jeet, Raampur Ka Lakshman and Jawani Diwani. Jawani Deewani was one of the biggest hit of his career and even today, most of us like listening to the songs of these hit movies of 80’s, 90’s and recreate the magic of that era’s music, brilliant compositions and  R.D Burman ruling hearts with his innovative music skills.

Randhir Kapoor‘s marriage with Babita didn’t be a successful marriage and due to unsolved differences they started staying separately but have always been there for their beautiful and talented daughters Karisma and Kareena. Ups and downs in career and life is expected but ups and downs in family life is more chaotic and disturbing and all of this can be forgotten and every wound can be healed whenever you will see all your loved ones under the same roof. Such was the moment in Randhir‘s life this year. He had almost all of his loved ones with him on this birthday other than Rockstar Ranbir Kapoor as he is busy shooting for “Jagga Jasoos“, he missed being part of this happy day.

We wish you a very Happy Birthday Randhir Kapoor along with good health and a beautiful life ahead. Cheers !![/tps_footer]