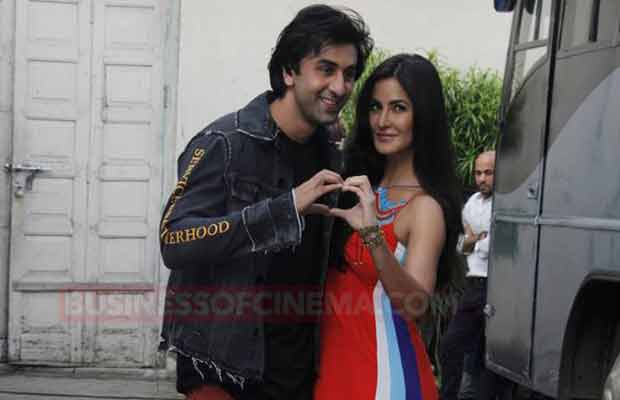 Ranbir Kapoor and Katrina Kaif are currently on a promotional spree for their upcoming film Jagga Jasoos.

The Bollywood actors and ex-couple Ranbir Kapoor and Katrina Kaif share an adorable chemistry with each other. Although now separated, but their bond has not weakened as the two of them still appear to be good friends.

Both of them are going to be seen sharing screen spaces with each other in their much-delayed film ‘Jagga Jasoos.’ It was very recently when the film’s first two songs, ‘Ullu Ka Pattha’ and ‘Galti Se Mistake’ were launched.

They are currently on a promotional spree for the film. The actors were snapped at the Mehboob studios, where they were spotted posing for the shutterbugs in this lovey-dovey pose.

While Katrina was looking very pretty in that multi-colored high-low dress, Ranbir was looking like a cool dude in a denim jacket over black tee and brick-red loose pants.

Talking about the work front of the actor, Ranbir Kapoor is currently busy in shooting Sanjay Dutt’s biopic. The film was earlier slated to release along with Salman Khan and Katrina Kaif starrer ‘Tiger Zinda Hai’ on December 22. But that has been changed now. The film will now be releasing on March 30, 2018.

On the other hand, leaving ‘Jagga Jasoos’ Katrina Kaif has a number of films in her kitty including ‘Tiger Zinda Hai,’ ‘Thugs Of Hindostan’ and Anand L Rai’s next.

Directed by Anurag Basu, ‘Jagga Jasoos’ is all set to hit the theatres on July 14, this year.