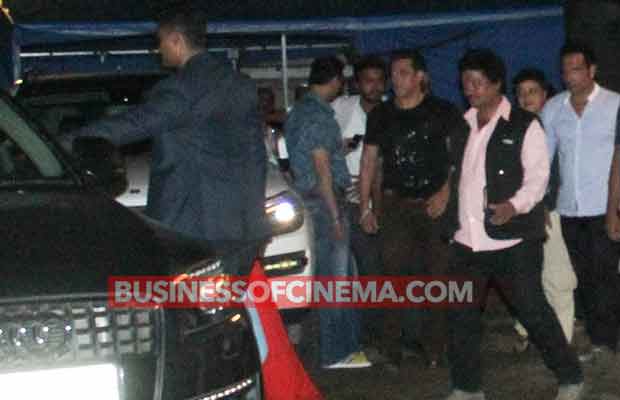 After interviews and media interaction session at Mehboob studios, Bollywood superstar Salman Khan took everyone by surprise by hailing an autorickshaw to reach his sea-facing apartment. However, Salman taking auto ride was not a big deal as the actor keeps doing that every now and then. What grabbed everyone’s attention was Salman giving a hug and kiss to former girlfriend Katrina Kaif, who was also at the same place for the interviews of her upcoming film Jagga Jasoos.

Ranbir Kapoor and Katrina Kaif were at Mehboob Studios for their upcoming film Jagga Jasoos promotions. On the other hand, Salman Khan along with his brother Sohail Khan was also promoting their upcoming film Tubelight. Post interviews, Katrina headed to meet Salman for a quick chat, as the two were at the same place while Ranbir left the place way to early in order to avoid bumping into Salman.

One can see in the photos, Salman hugged, kissed and dropped his former girlfriend Katrina to the car and then took an auto ride to his place with Ramesh Taurani. Now, something such unexpected can be expected from Salman Khan only. However, it was great to see Salman and Katrina bonding again.