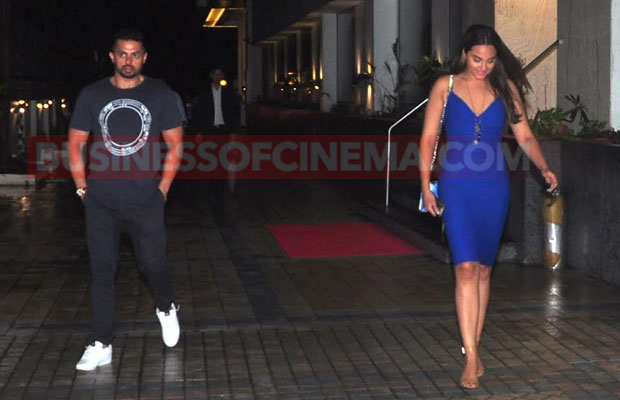 Bollywood actress Sonakshi Sinha might have a shout out loud that she is not dating Bunty Sajdeh but their recent appearance at an event is making us believe that indeed there is something brewing between the two.  The alleged couple was spotted arriving together at a club where who’s who of the B-town and television industry was present. As soon as they saw paparazzi, Sonakshi and Bunty walked separately. Bunty walked ahead inside the pub while Sonakshi posed for the shutterbugs. The Dabangg actress looked gorgeous in a blue knee length dress.

The actress has never been vocal about her relationship but it is said that the actress is dating Sohail Khan’s brother-in-law Bunty Sajdeh since a very long time. In fact, her recent outing with Sohail Khan and family only proved everything. Reportedly, the love sparked between the two and started dating each other in 2012 when Sajdeh started managing her endorsement deals.