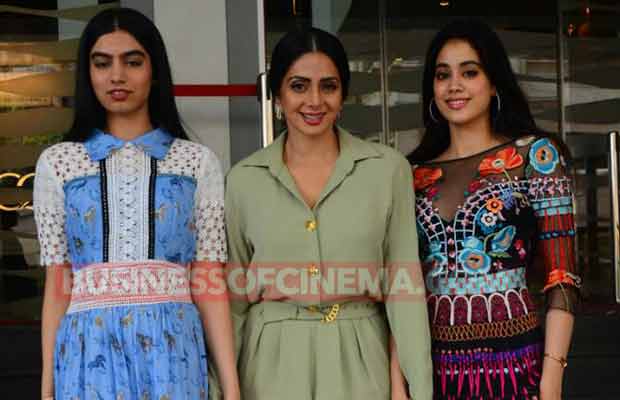 Khushi and Jhanvi Kapoor attend the trailer launch of Mom with their parents Sridevi and Boney Kapoor.

The Bollywood actress Sridevi is making a comeback in the industry with her upcoming release, Mom. She is going to appear on the screens after 5 years, since she last worked in the 2012 release English Vinglish.

It was the trailer launch event of her film, where she had come with her lovely family. Husband Boney Kapoor and her beautiful daughters Khushi Kapoor and Jhanvi Kapoor were there with the actress, extending their supports.

Sridevi was looking simply stunning in that lime green jumpsuit, with golden buttons. Keeping it simple and sober, the actress was minimally accessorized with golden earrings and golden strappy sandals.

On the other hand, the daughters were giving a tough competition to their mother when it comes to good looks. While Khushi was looking stylish in that blue and white long dress, Jhanvi was just slaying it in a black embellished dress.

Oh what a beautiful mother and daughters trio!

The Bollywood beauty Sridevi is making a comeback in the industry after 5 years with Mom. She was last seen in Gauri Shinde’s English Vinglish. Mom, the film, also stars Akshaye Khanna, Abhimanyu Singh and Pitobash Tripathi in significant roles. Produced by Boney Kapoor, the film has been directed by Ravi Udayawar.

The film was earlier scheduled to release on July 14, but will now hit the screens on July 7, this year. It is probably because the makers of Mom do not want their film to clash with Ranbir Kapoor and Katrina Kaif starrer Jagga Jasoos and Shraddha Kapoor starrer Haseena.